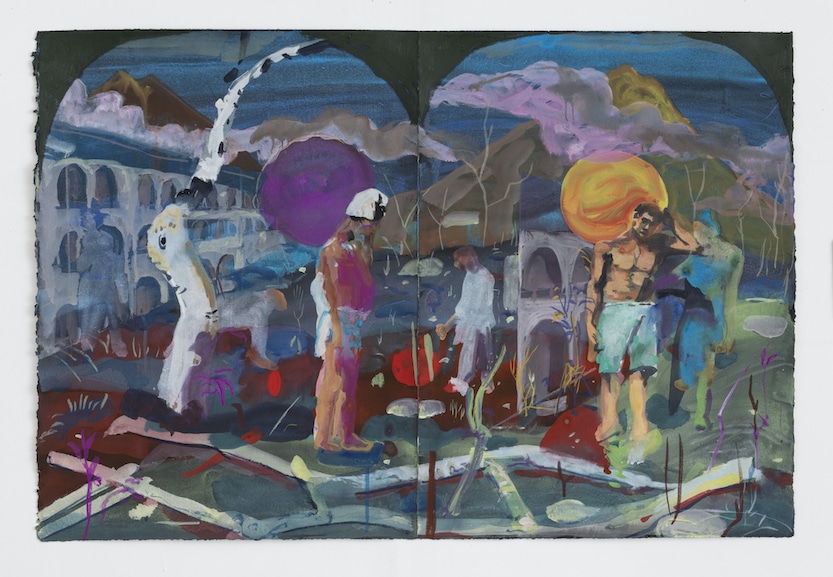 Maia Cruz Palileo “The Sun and the Moon, 2021”. Image courtesy of The Wattis Institute.

September 14 to December 4 – Maia Cruz Palileo: Long Kwento at The Wattis Institute:  Influenced by the oral history of the artist’s family’s arrival to the United States from the Philippines, as well as the history between the two countries, Maia Cruz Palileo investigates larger questions pertaining to identity, history, migration, and concepts of time. Infusing narratives with both memory and imagination, Palileo translates diverse materials into a novel formal language to describe a new world of their own making.  Opening reception September 14th, 4–8 pm, with a curator’s walkthrough at 5:30pm. 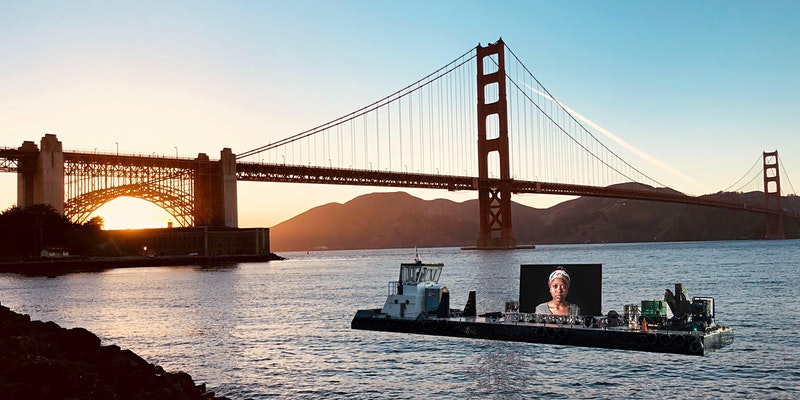 September 17 to 19 – Shimon Attie: Night Watch produced by Catharine Clark, BOXBLUR and Immersive Arts Alliance:  In conjunction with artist Shimon Attie’s exhibition Here, not Here, at Catharine Clark Gallery, Night Watch is a floating installation featuring close-up video portraits of 12 refugees granted political asylum in the United States. The work is presented on a 20ft-wide hi-resolution LED-screen aboard a large, slow-moving barge to allow for on-shore public viewing.  On the evenings of September 17 – 19, 2021, Night Watch will travel on a barge captained by Matt Butler and slowly navigate the cities’ shorelines from 6:15pm to 8:15pm, corresponding with scheduled live nightly performances.

Sunday September 19 – Prime viewing for East Bay shorelines will be on the Oakland Estuary. Oakland’s Brooklyn Basin will be activated by live music selected by Classical Revolution and educational materials provided by non-profit partners. For more information visit here. 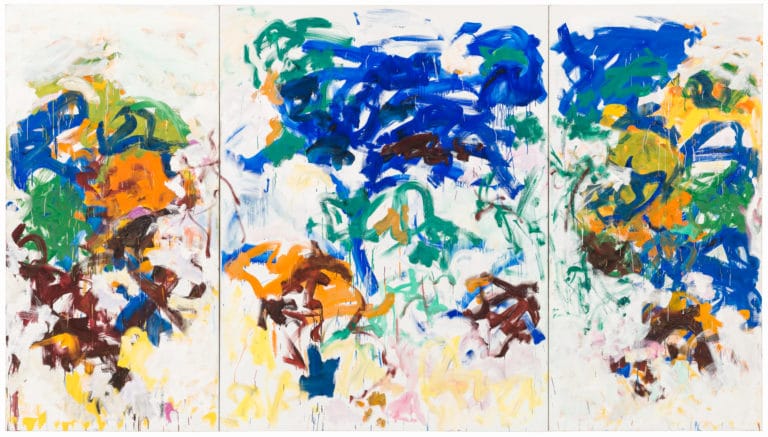 September 4 to January 17 – Joan Mitchell at SFMOMA:  The painter Joan Mitchell has long been hailed as a formidable creative force. She first attained critical acclaim and success in the male-dominated abstract expressionist circles of 1950s New York, then spent over three decades in France creating distinctive abstract paintings that pulse with energy and color and draw on landscape, memory, poetry, and music.  This exhibition includes rarely seen early paintings and drawings that established Mitchell’s career, along with large-scale multi-panel masterpieces from her later years that demonstrate her mastery of color. Suites of paintings, sketchbooks, and drawings, as well as an illuminating selection of the artist’s letters and photographs, open a new window into the richness, range, and ambition of Mitchell’s deeply influential and barrier-breaking creative practice.  SFMOMA is located at 151 Third Street in San Francisco. 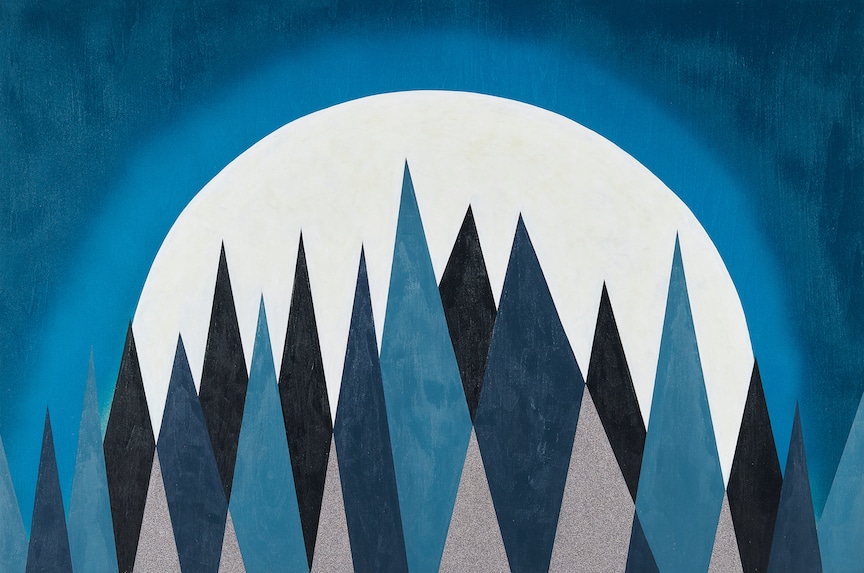 September 11 to November 6 – Adia Millett: There is no them. There is only us at Traywick Contemporary:  This solo exhibition features recent paintings and works on paper by Oakland based artist Adia Millett.  Addressing issues of identity, personal memory and collective history, Millett is concerned with the fragile complexity and interconnectivity among all living things. A creative fluidity informs her larger art practice which includes a diverse range of media including textiles, constructions, and video. Millett’s approach is intuitive and improvisational, with a process-oriented, tactile sensibility. Running through her practice and her varied materials choices is an interrelated narrative about the imaginative, liberating possibilities of abstraction.  Traywick Contemporary is located at 895 Colusa Ave in Berkeley. 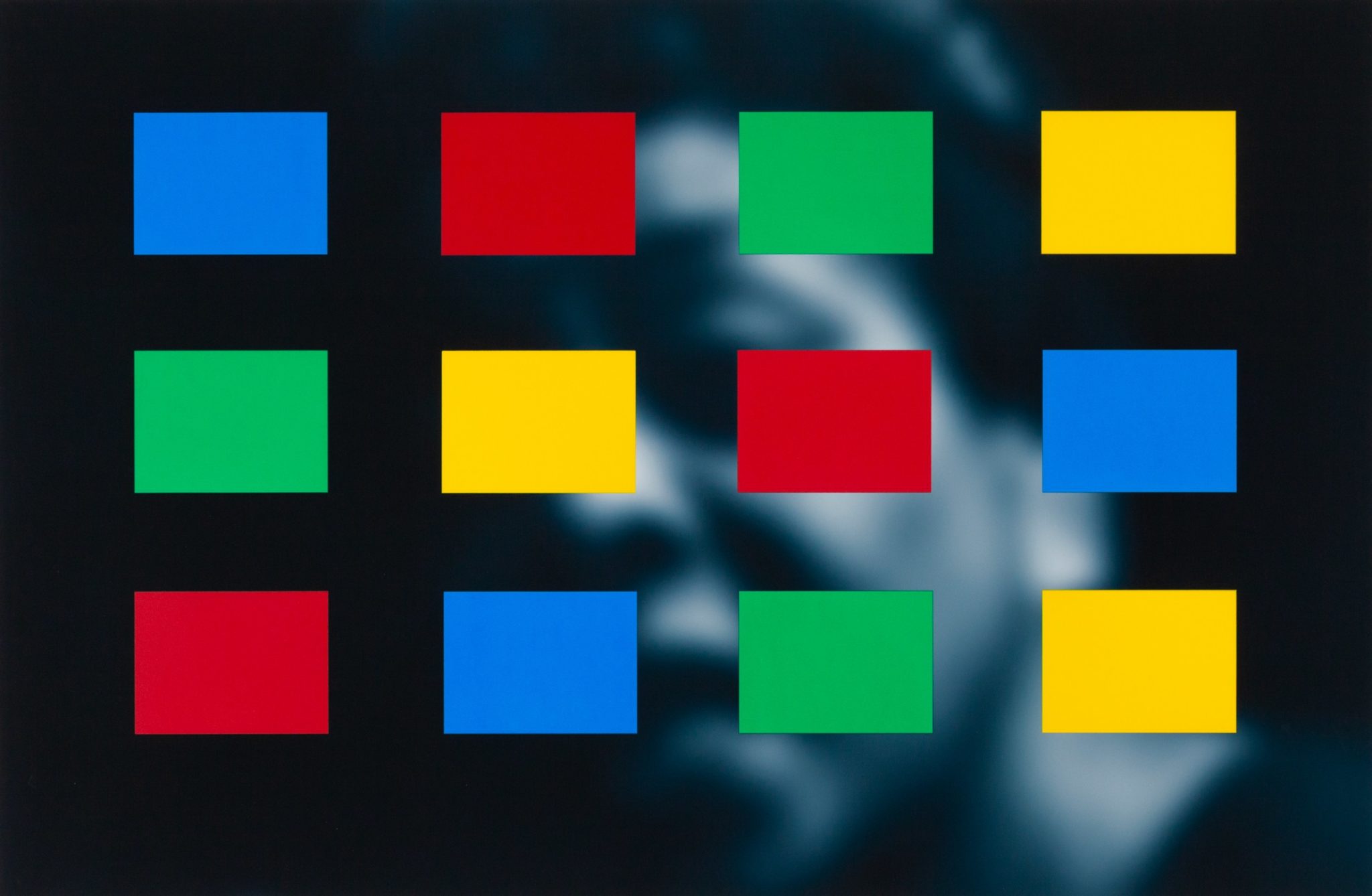 September 9 to October 23 – Carrie Mae Weems: Witness at Fraenkel Gallery:  This survey exhibition examines Weems’ extraordinary achievement as an artist over four decades. Focusing on history, identity, and the structure of power, Witness traces Weems’s use of performance and her exploration of the inscription of authority in architecture and photography.  Fraenkel Gallery is located at 49 Geary Street in San Francisco. 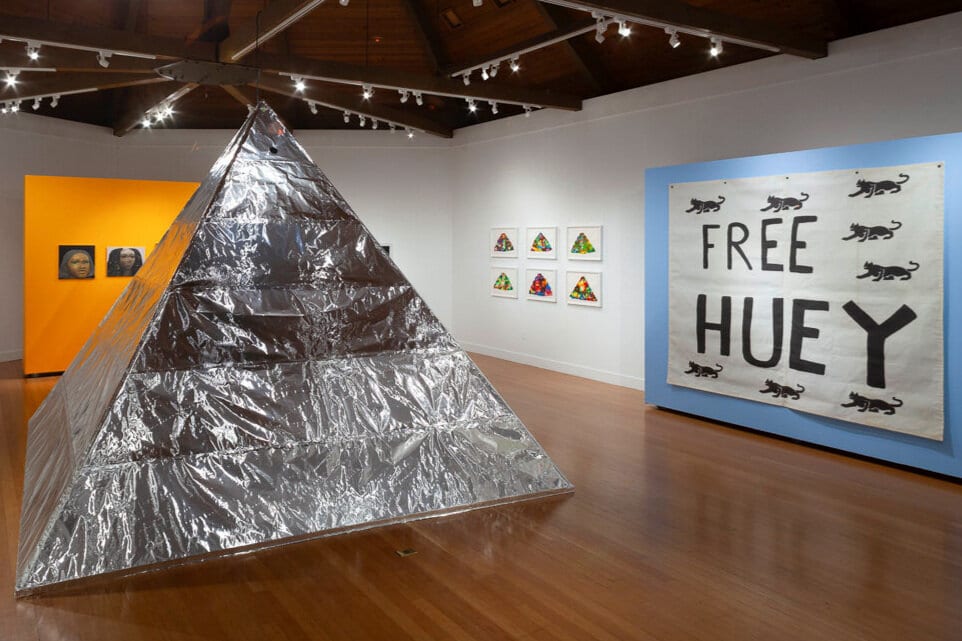 Ongoing to October 16 – David Huffman: Afro Hippie at Berkeley Art Center:  For his solo exhibition at The Berkeley Art Center, artist David Huffman presents a deeply personal show of new and existing works, including family mementos and a series of ‘psychic portraits’ that have never been seen publicly before.  Born and raised in Berkeley in the late 1960s and ‘70s, he was heavily influenced by his mother’s social and political activism — especially her work for the Black Panthers, which included designing the iconic Free Huey flag.  The Berkeley Art Center is located at 1275 Walnut Street in Live Oak Park.

David Huffman will be in conversation with Rhea Fontaine, Thursday September 23 at 5:30 pm.  RSVP here. 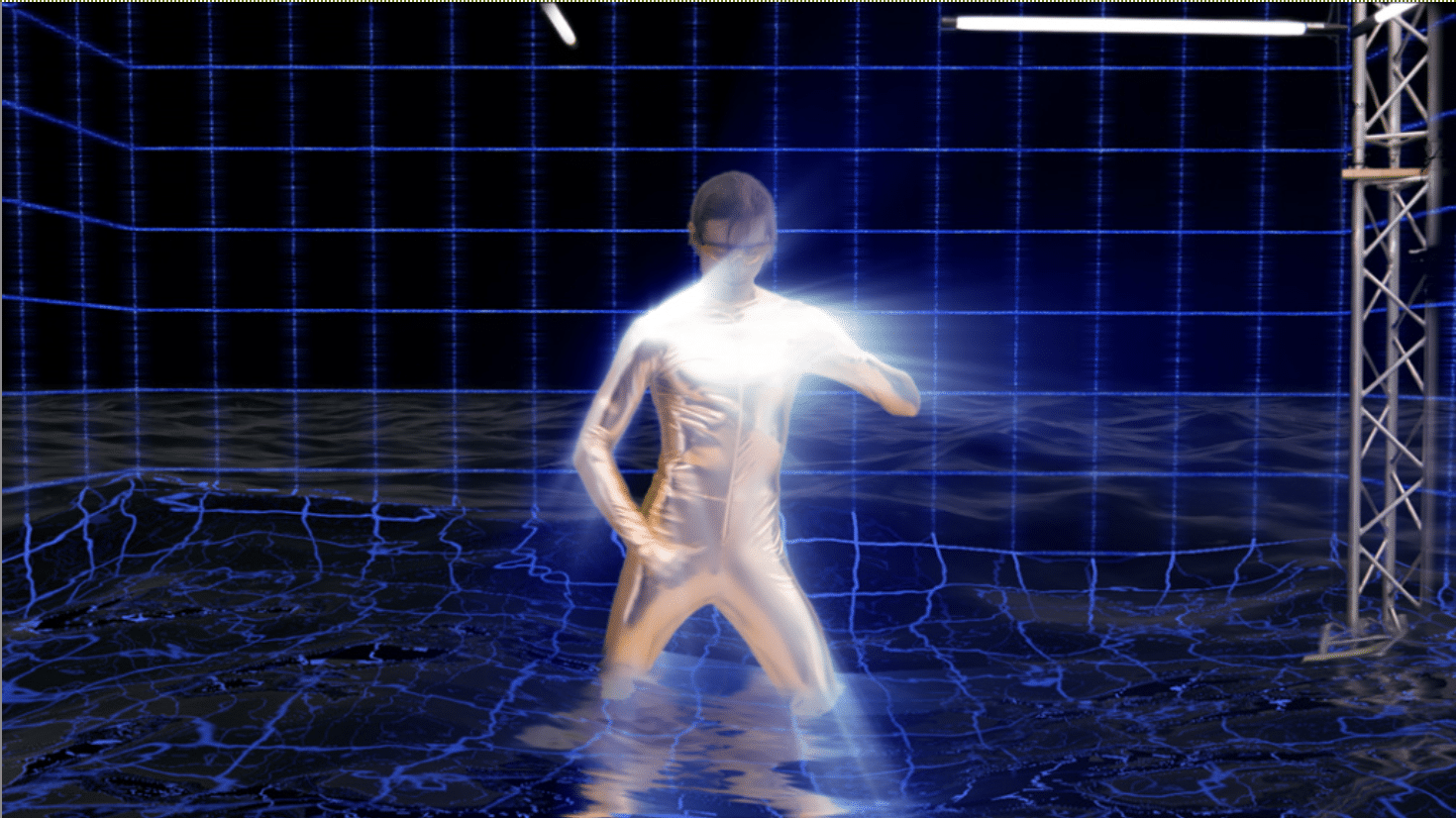 Ongoing to November 27 – Hito Steyerl: Factory of the Sun at San Jose Museum of Art:  This immersive video installation tells a surreal story of workers whose forced dance moves in a motion capture studio are turned into artificial sunshine. The story is based on an actual YouTube phenomenon (her studio assistant’s brother whose viral homemade dance videos were used as a model for Japanese anime characters) and a news story about an experiment at CERN nuclear research facility that claimed to have measured a particle traveling faster than the speed of light. On screen, Steyerl interweaves fact and fiction; a montage of YouTube dance videos, drone surveillance footage, real documentation of recent international student uprisings combines with video game characters, fake news, and dancing, gold lamé-costumed avatars. In this imaginative reality spun from Haraway’s theory, the motion capture studio’s glowing grid of blue LED lights extends beyond the screen into the gallery, like a Star Trekkian “holodeck” able to materialize a different world in three dimensions. Modern warfare, corporate culture, and anti-capitalist resistance movements are played out by disembodied characters—avatars, bots, or proxies for the human viewers who watch the video from the vantage of reclined beach chairs.  The San Jose Museum of Art is located at 110 South Market Street in San Jose.

Ongoing to January 30 – New Time: Art and Feminisms in the 21st Century at BAMPFA:  This exhibit is a major survey exploring recent feminist practices in contemporary art.  Although artworks made since 2000 are the primary focus, the objects and installations on view span several generations, mediums, geographies, and political sensibilities. In this way the project seeks to convey the heterogeneous, intergenerational, and gender-fluid nature of feminist practices today.  BAMPFA is located at 2155 Center Street in Berkeley.