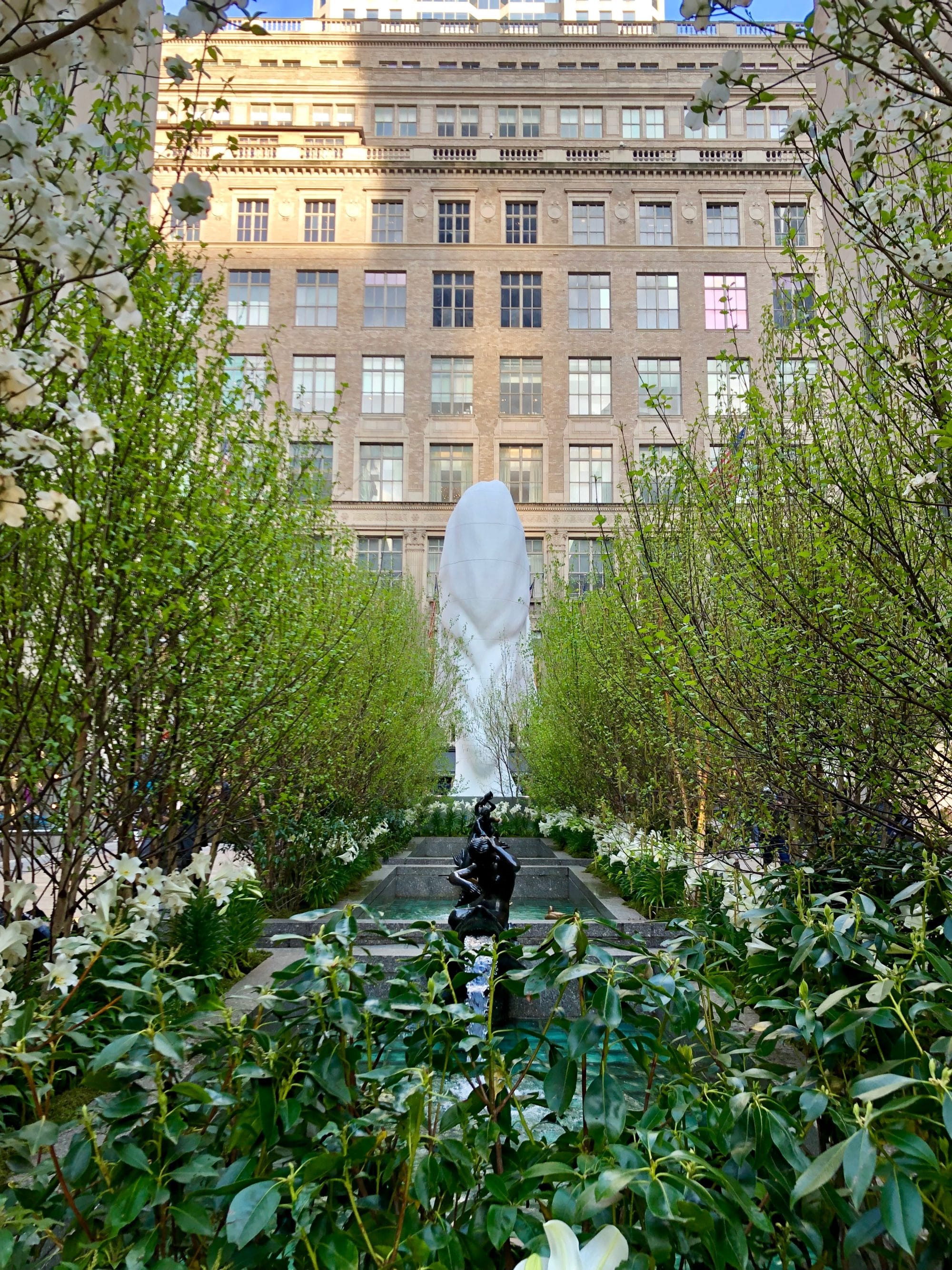 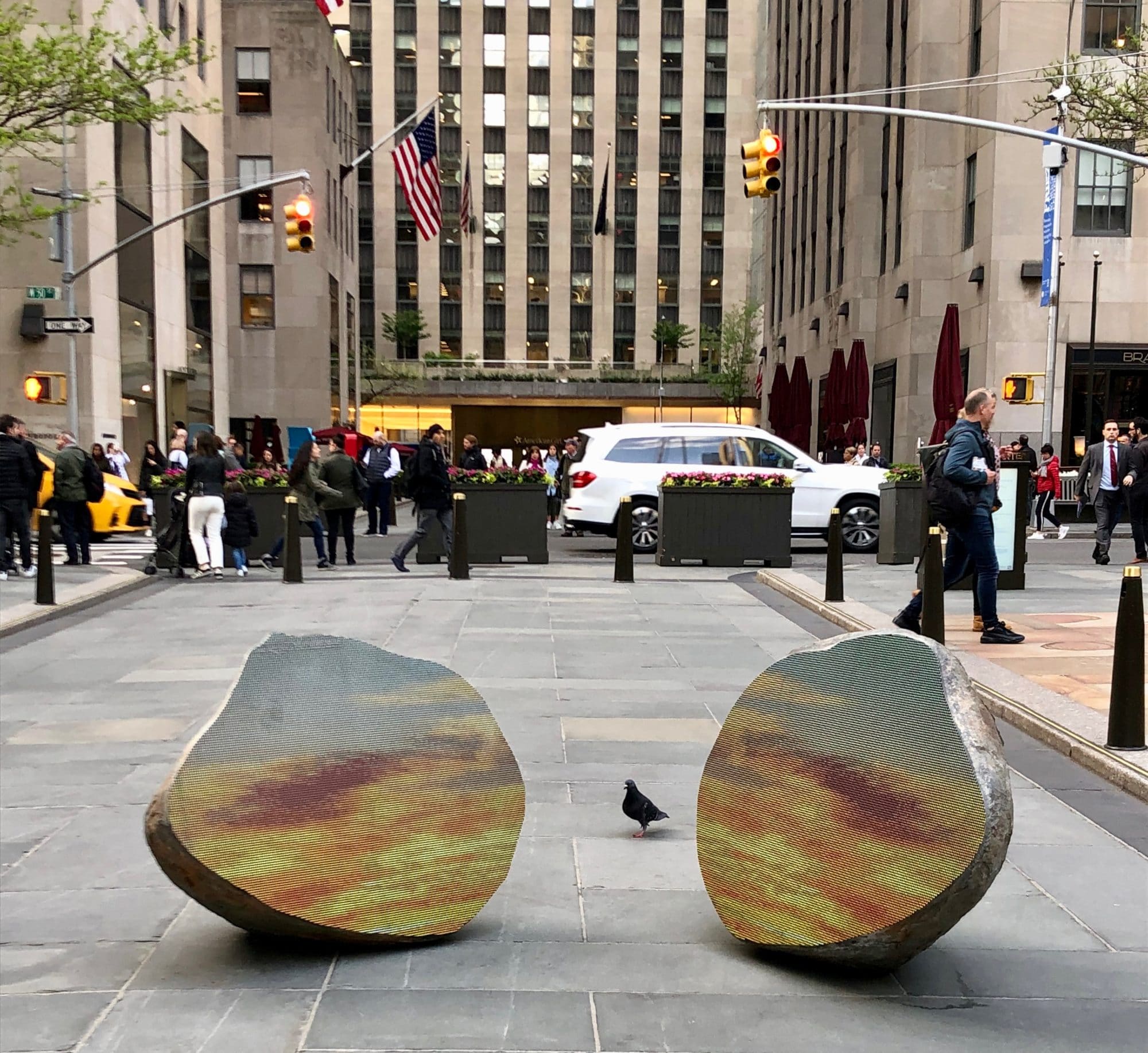 For the first time in NY, Frieze installed sculptural works throughout the Rockefeller Center Plaza. Curated by Brett Littman, the director of the Isamu Noguchi Foundation and Garden Museum in Long Island City, this large public art initiative presents the work of 14 international artists including Kiki Smith, Ibrahim Mahama, Nick Cave, and Joan Miró, among many others. Littman considered two things when selecting the work: one, that the artist may not have sited a public sculpture in New York before, and two, that the artists are diverse in terms of geographically diverse, age diverse and career diverse- with both men and women artists who are no longer living that are very well known, and young artists whose careers are just beginning to flourish. 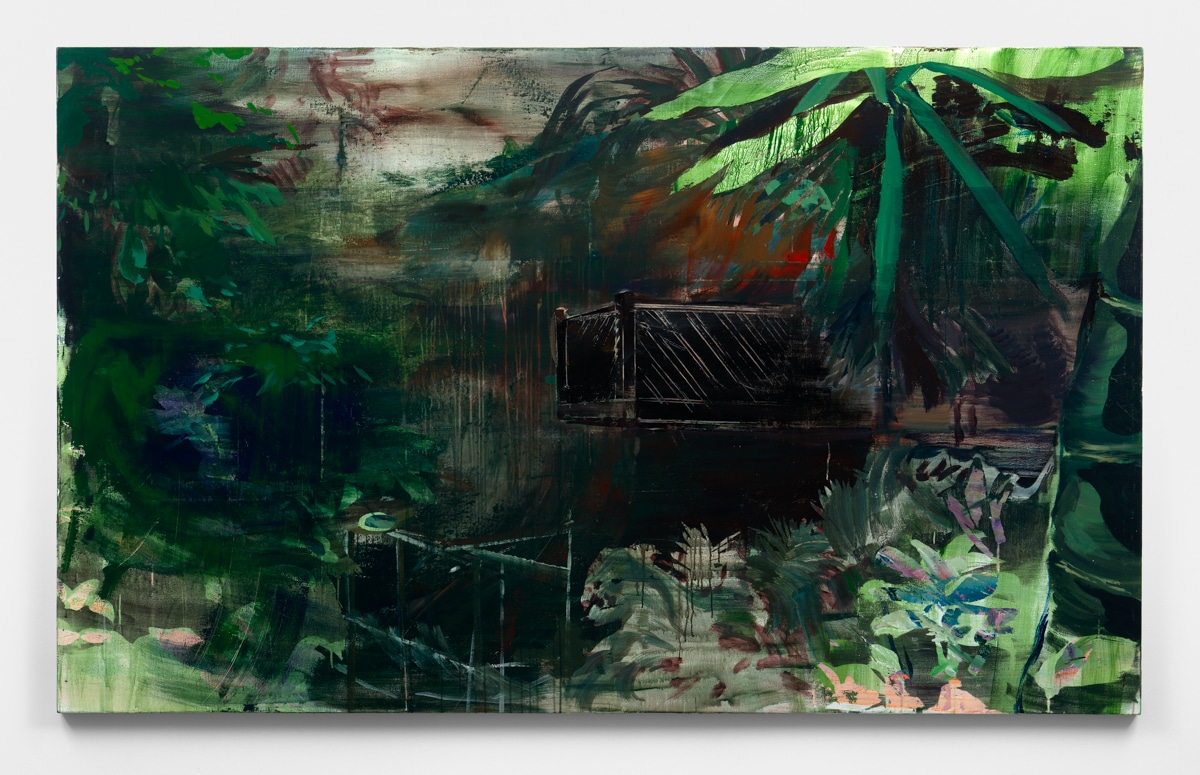 Beijing based artist Lu Song creates evocative acrylic landscape paintings, inspired by 19th century German Romanticism, which focus on the conception and depiction of an idealized place of safety or comfort and the connections and disconnections between humans and nature. The depth of the colors and the strength of each brushstroke evoke a sense of false serenity and veiled thoughts. 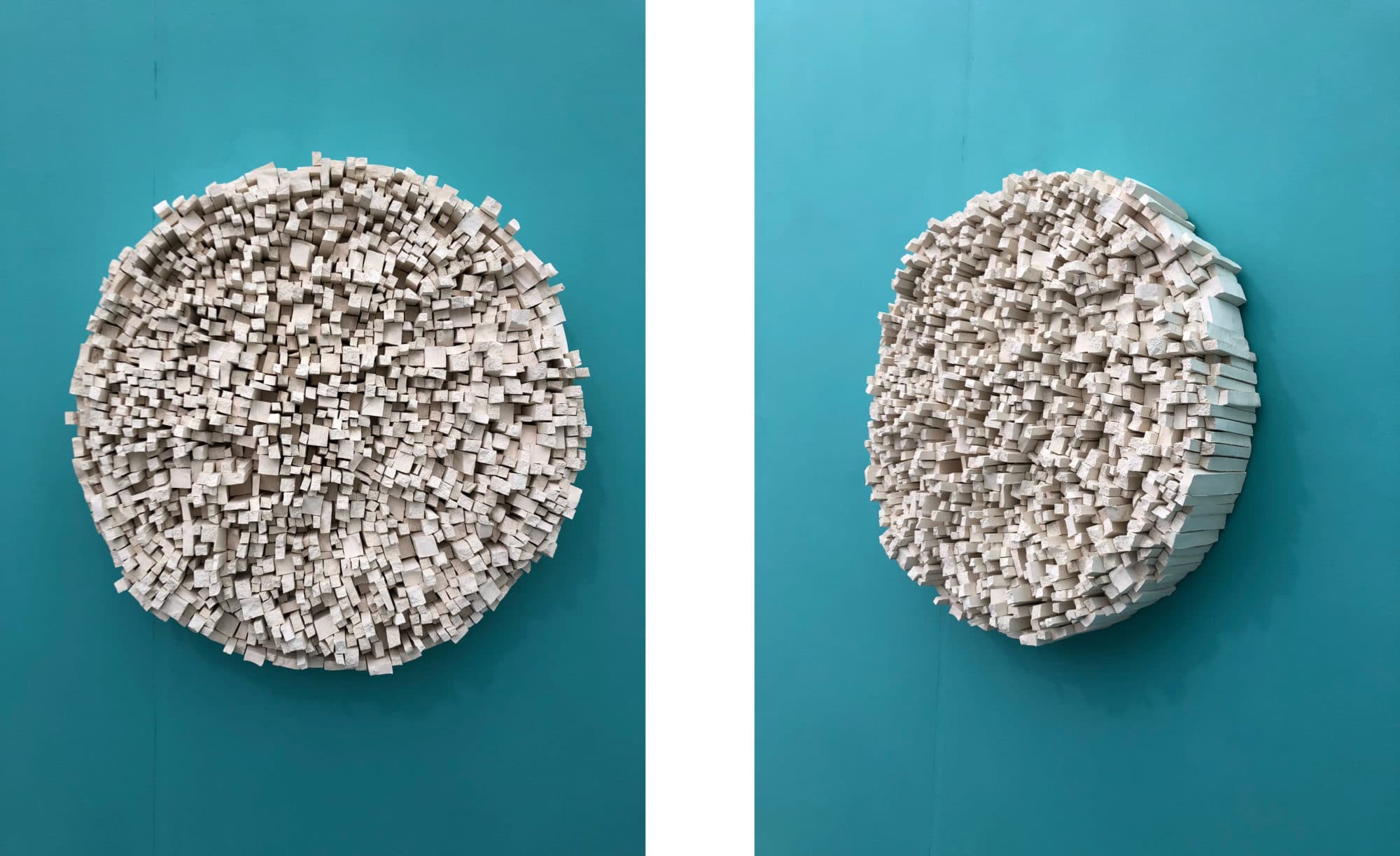 Jim Melchert’s works are lasting testaments to his conceptual explorations in ceramics. Melchert was influenced by early exposure to Japanese ceramic traditions and the Abstract Expressionist works of Peter Voulkos. For decades, he has questioned assumptions of the author’s control in the transformation and firing of clay, highlighting the humble, chance processes that are an integral aspect of art-making. This piece, made of unglazed pieces of ceramic tile scraps, creates a textural wall sculpture. 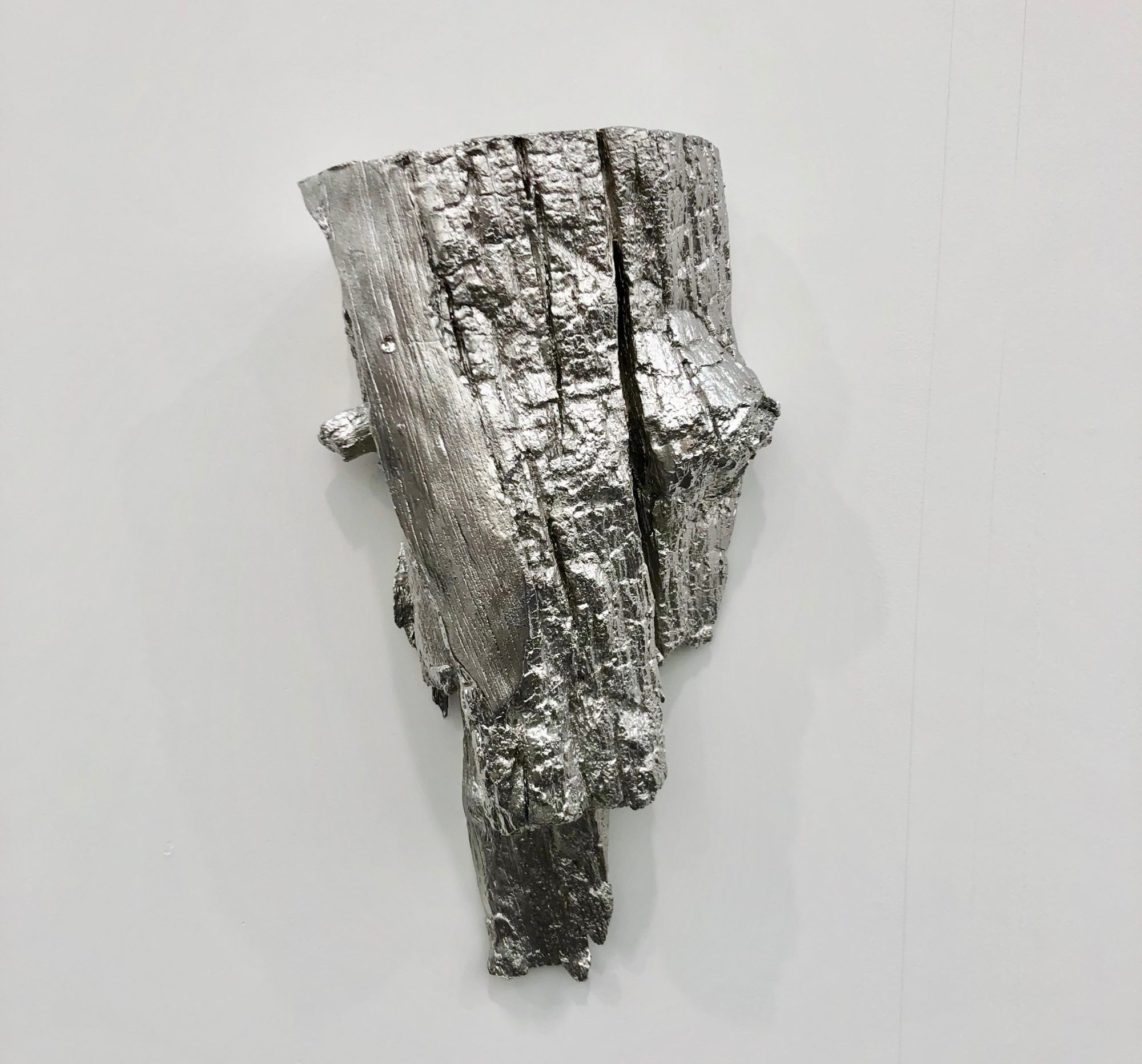 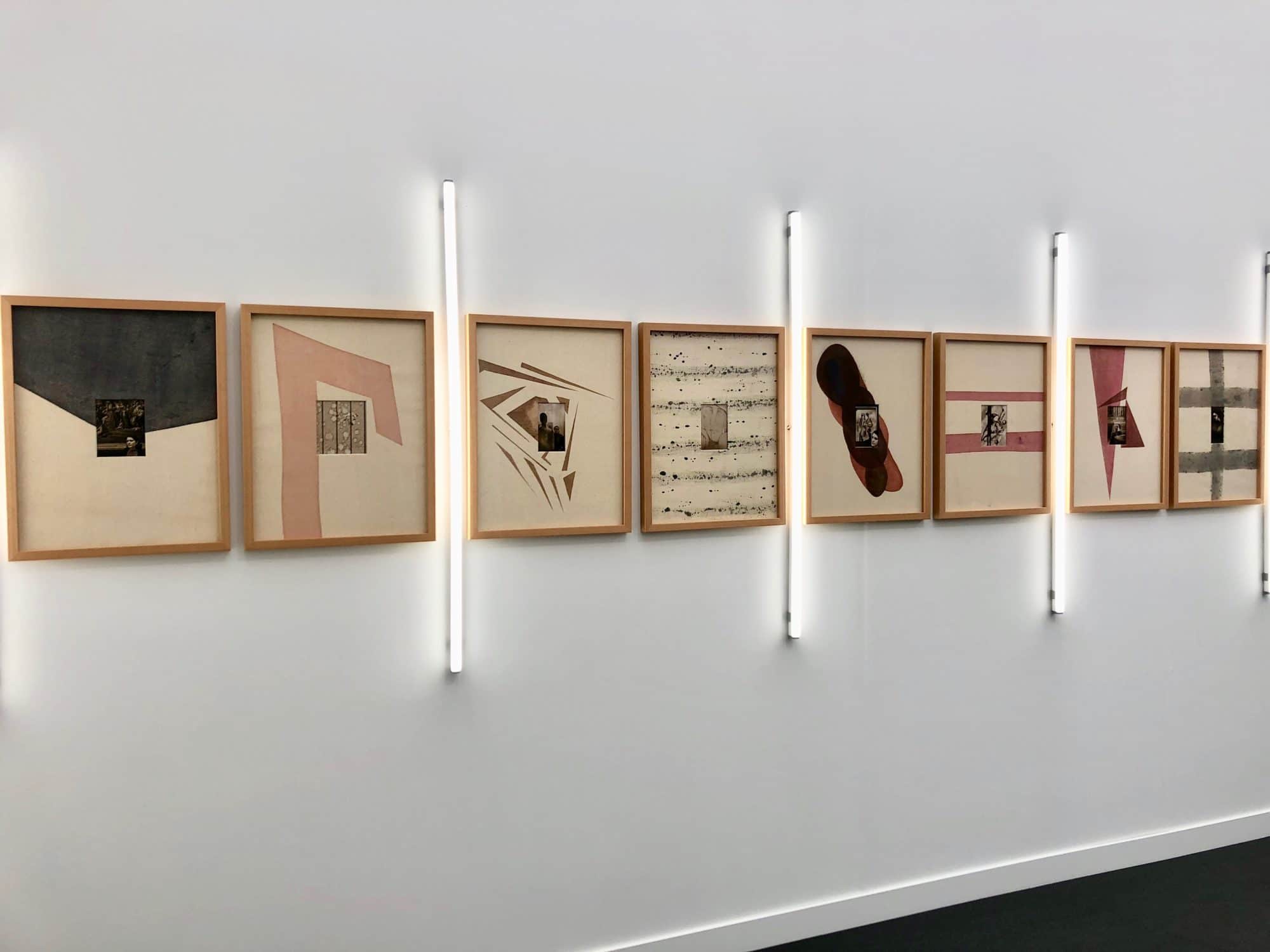 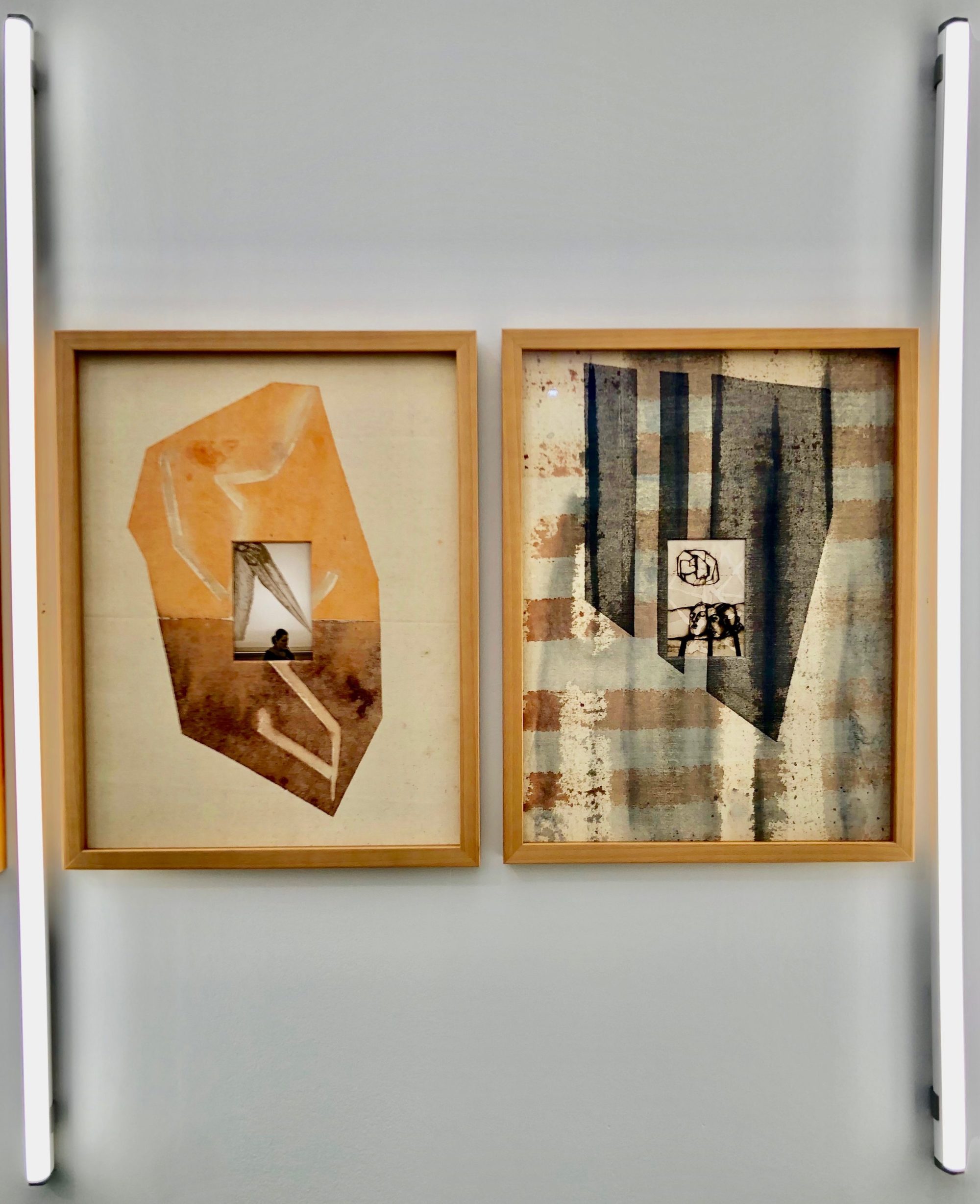 This is an installation of 6 diptychs installed with LED tube lights.  Each pair features Anju Dodiya’s portraits of encounters with the art of famous artists like David, Pistoletto, Magritte, and Durer on the left, paired with photographs of her own drawings – reworked, stained, in extreme detail (on the right) – making diptychs which are intimate and yet inaccessible. 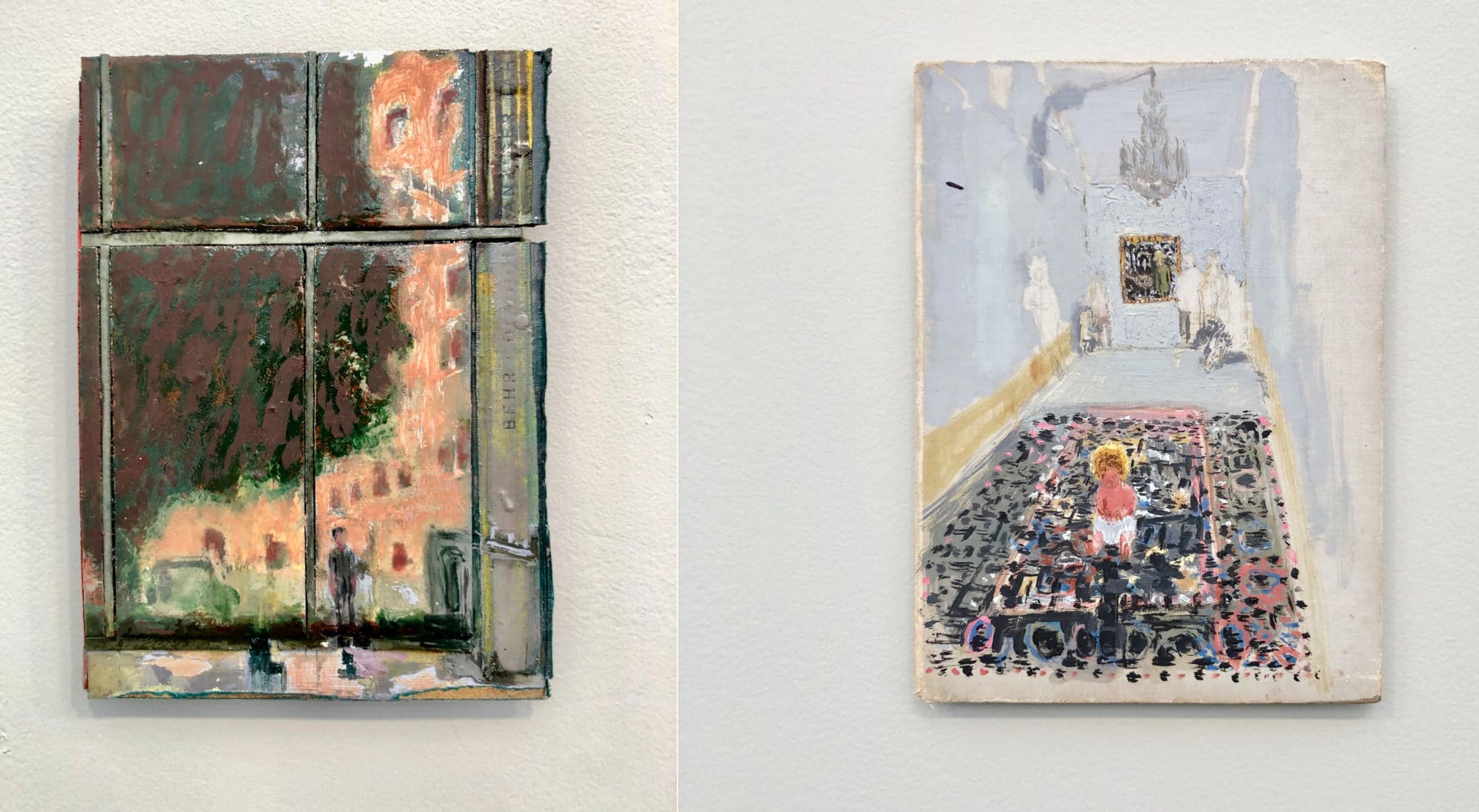 Ingleby Gallery featured a solo booth of Scottish artist Andrew Cranston’s painted book covers. Cranston is a storyteller of sorts, his work is seductive in terms of its use of narrative and humor. His paintings draw on a combination of personal histories, literature, second-hand accounts, images from cinema and observations of life. 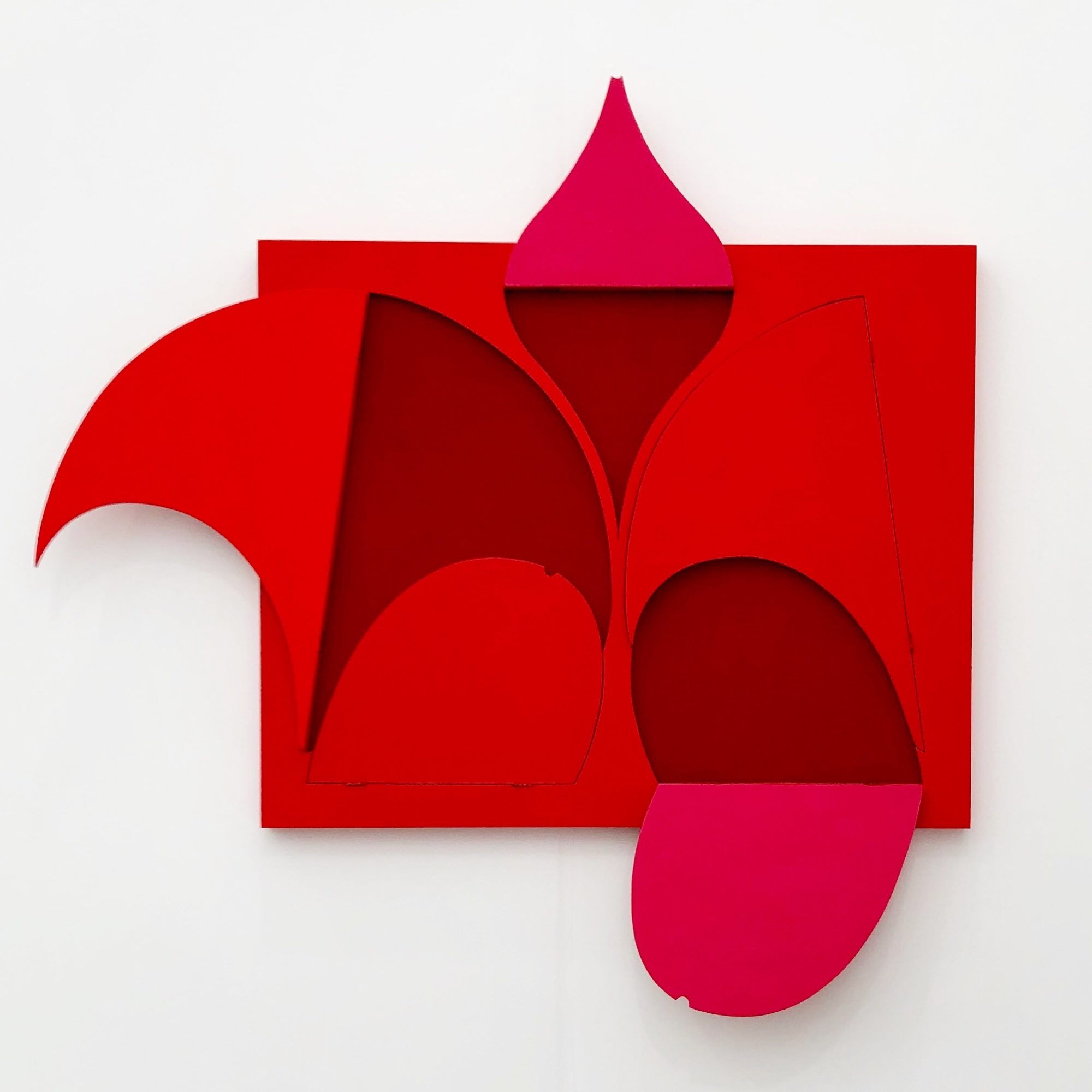 Katsumi Nakai, “Untitled,” 1969, acrylic and oil on plywood and canvas, at Ronchini Gallery.

Katsumi Nakai was a Japanese visual artist, born in 1927 in Hirakata, Osaka. He lived in Milan and was friends with Luciano Fontana. Nakai was interested in the idea of Spatialism, and how it was felt as a breach of artistic conventions, allowing for concepts such as time and space to enter the canvas. Nakai’s multi-colored work exceeds the limits of the flat canvas, by staging interplay between outward projections, form, and volumes. The sections of his brightly colored paintings on wood are hinged and meant to be interactive, a nod to Japanese origami. 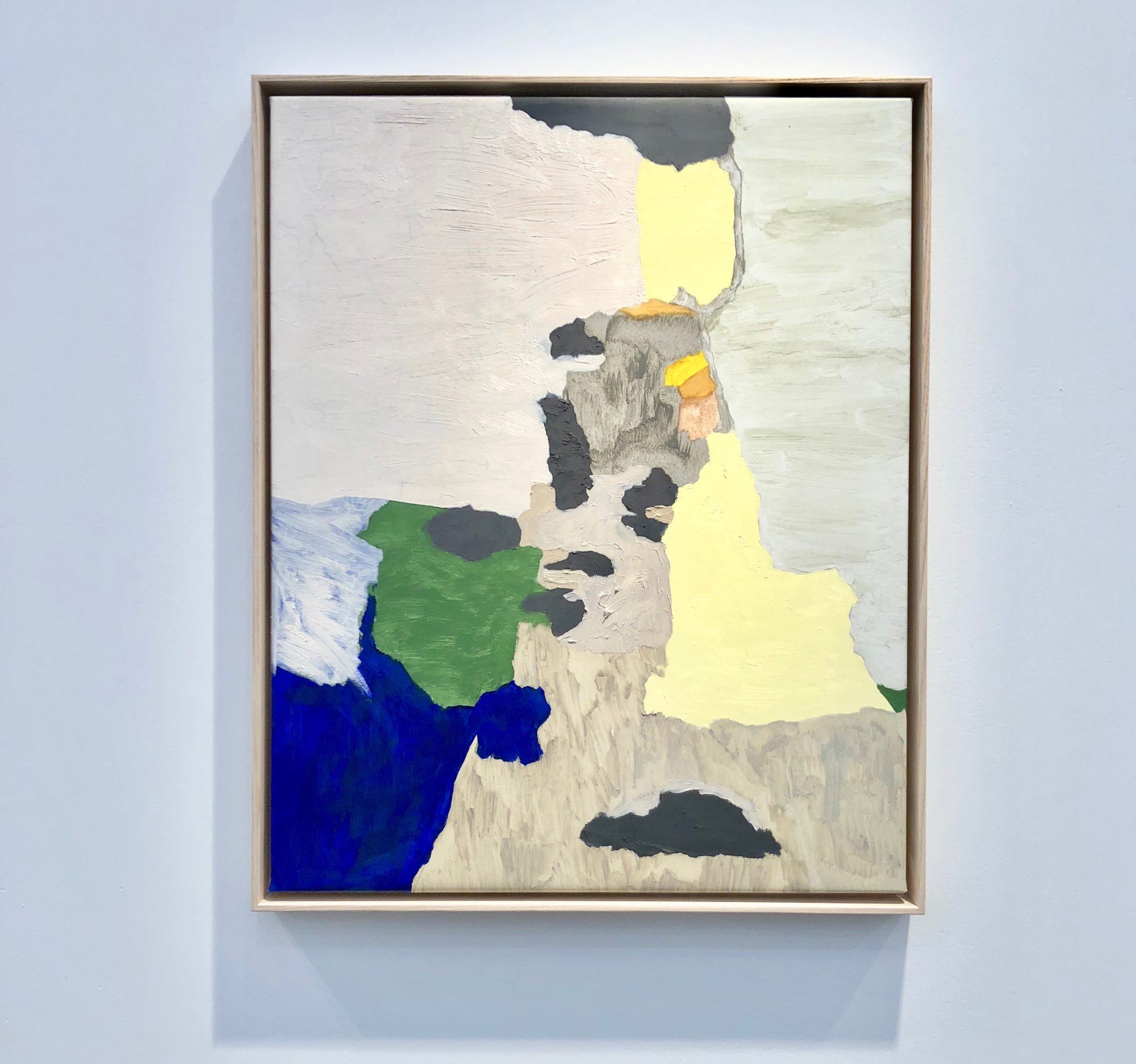 Eriksson’s works often appear quiet and understated; yet they are belied by a poetry and deep-seated significance. Since 2000 Eriksson has lived in a house situated in the midst of a forest. Small events and phenomena from the natural world that surrounds him become the inspiration for his works. 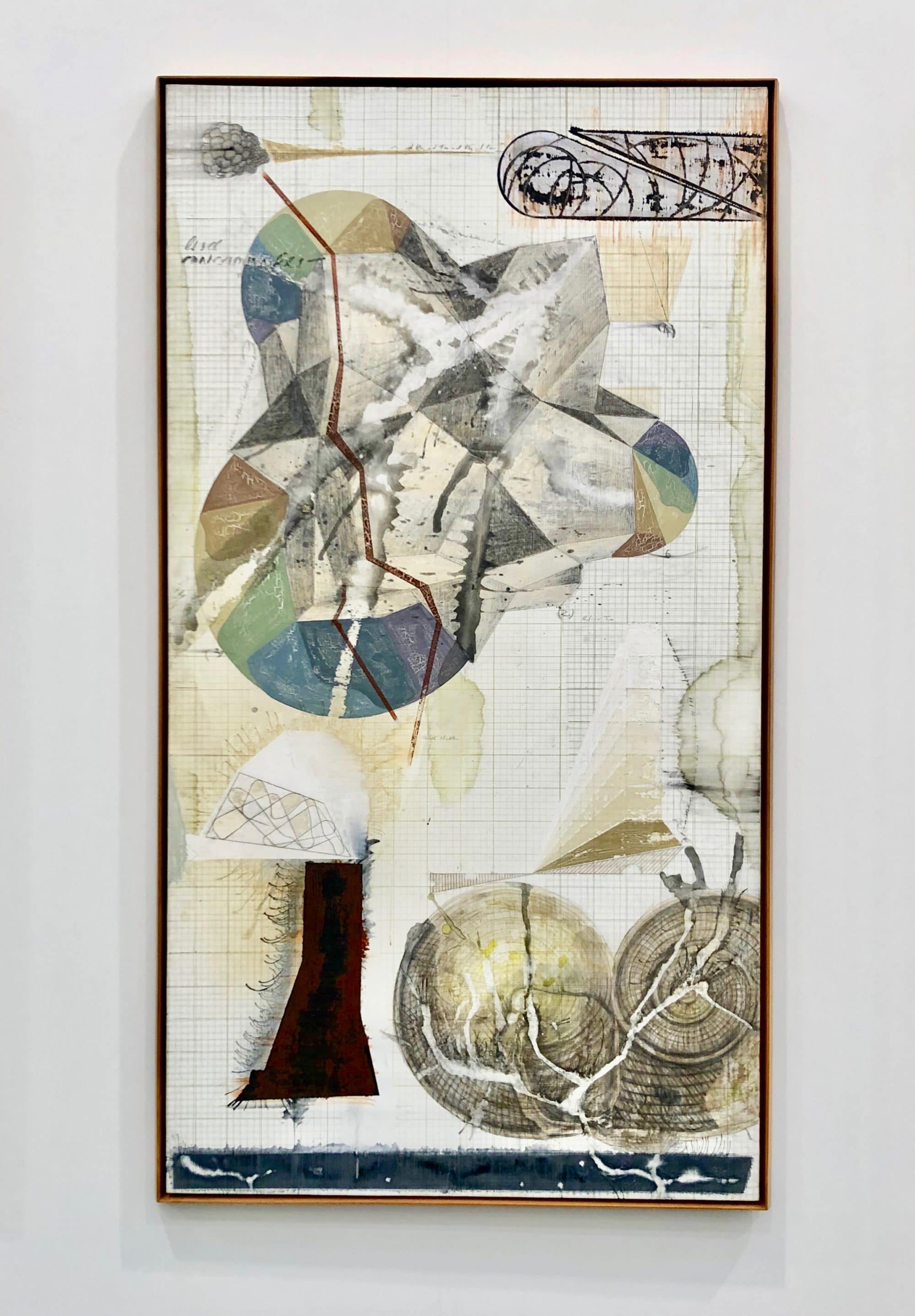 Nature Morte featured three new large works by Jitish Kallat entitled “Palindrome/Anagram Paintings”. A Palindrome is a word or phrase that reads the same both forwards and backward. An Anagram is a word or phrase that is formed from another by rearranging its letters. Combining the two, we are brought into an arena without linear progression, a space without gravity to anchor any hierarchies of meaning. 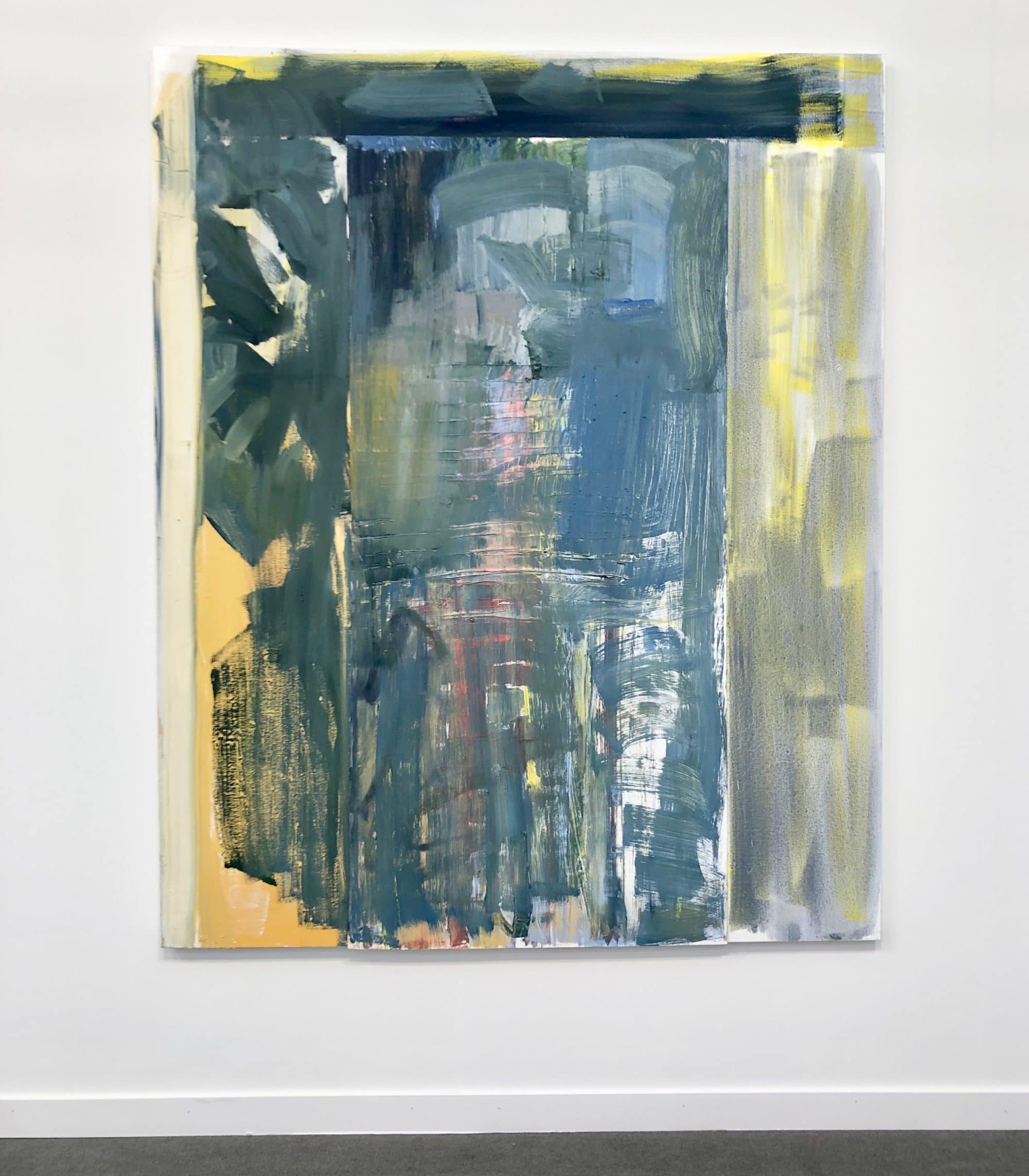 Through muscular mark-making and small improvisational gestures, Messineo’s paintings convey a hardscrabble version of reductive abstraction. Playing with the transformative nature of materials, she combines sections of thick paint with areas of atmospheric color that allude to qualities of light. 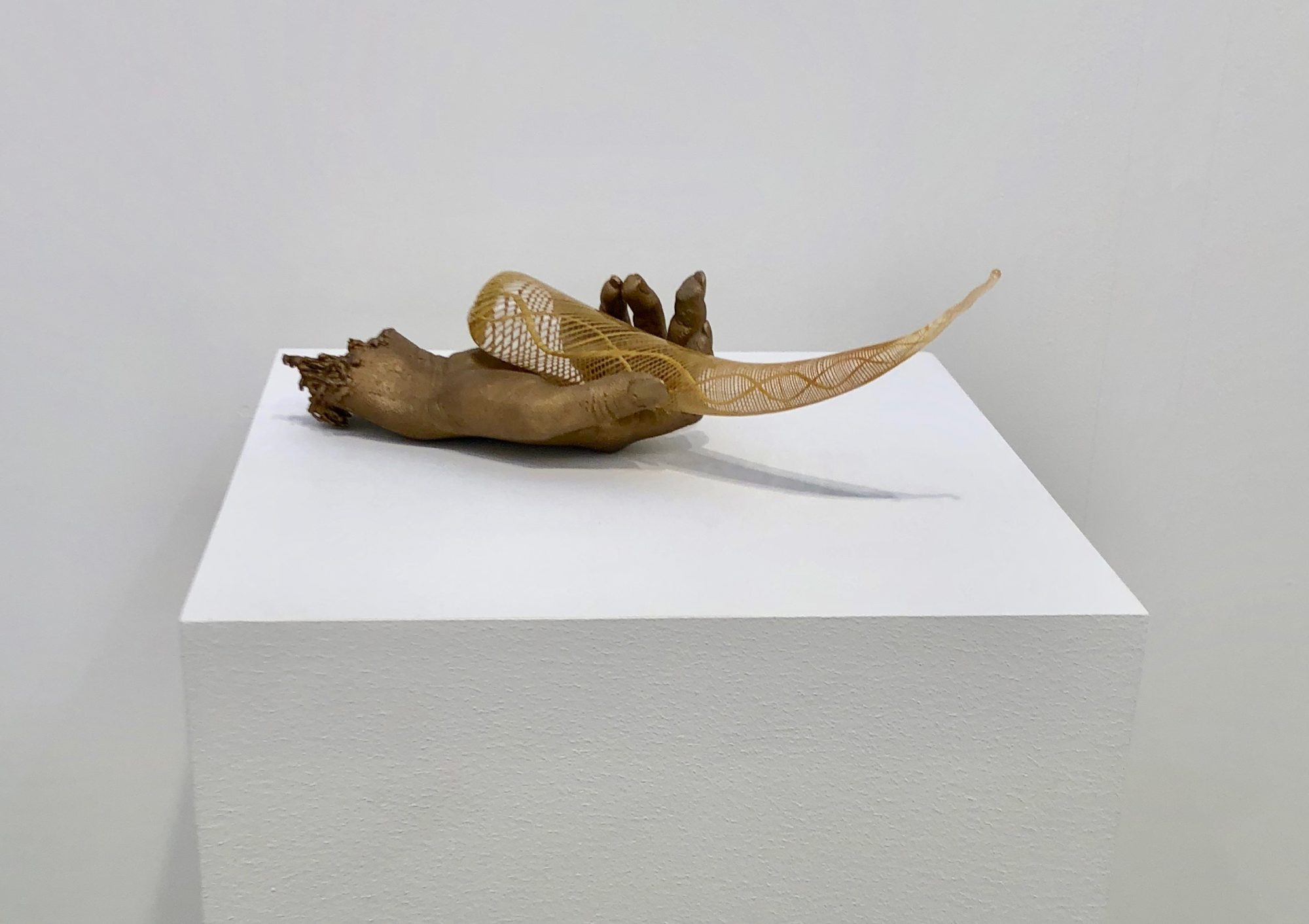 Working in a variety of media, such as wax, bronze, fire, glass, silicone, copper, and rope, Akashi investigates the capacity and boundaries of these elements and their ability to construct and challenge conventional concepts of form. Often pairing delicate hand-blown glass or hand-made wax candles with bronze casts of her own hands, Akashi captures momentary gestures, casting them into perpetual existence. Drawing attention to the fluidity and interconnectedness of the media she uses, Akashi aims to capture the tension and physicality of objects in her practice.

Manders explores the idea of “self portrait as a building”– an ongoing investigation into self-portraiture, architecture, language, and perception. His work constructs a timeless reality wherein contradictions co-exist: the past and the future, the temporary and the permanent, the beautiful and the grotesque, the tender and the brutal. In choosing the term yellow, Manders alludes to the multitudes that language may contain; yellow can convey a range of associations, feelings and memories. 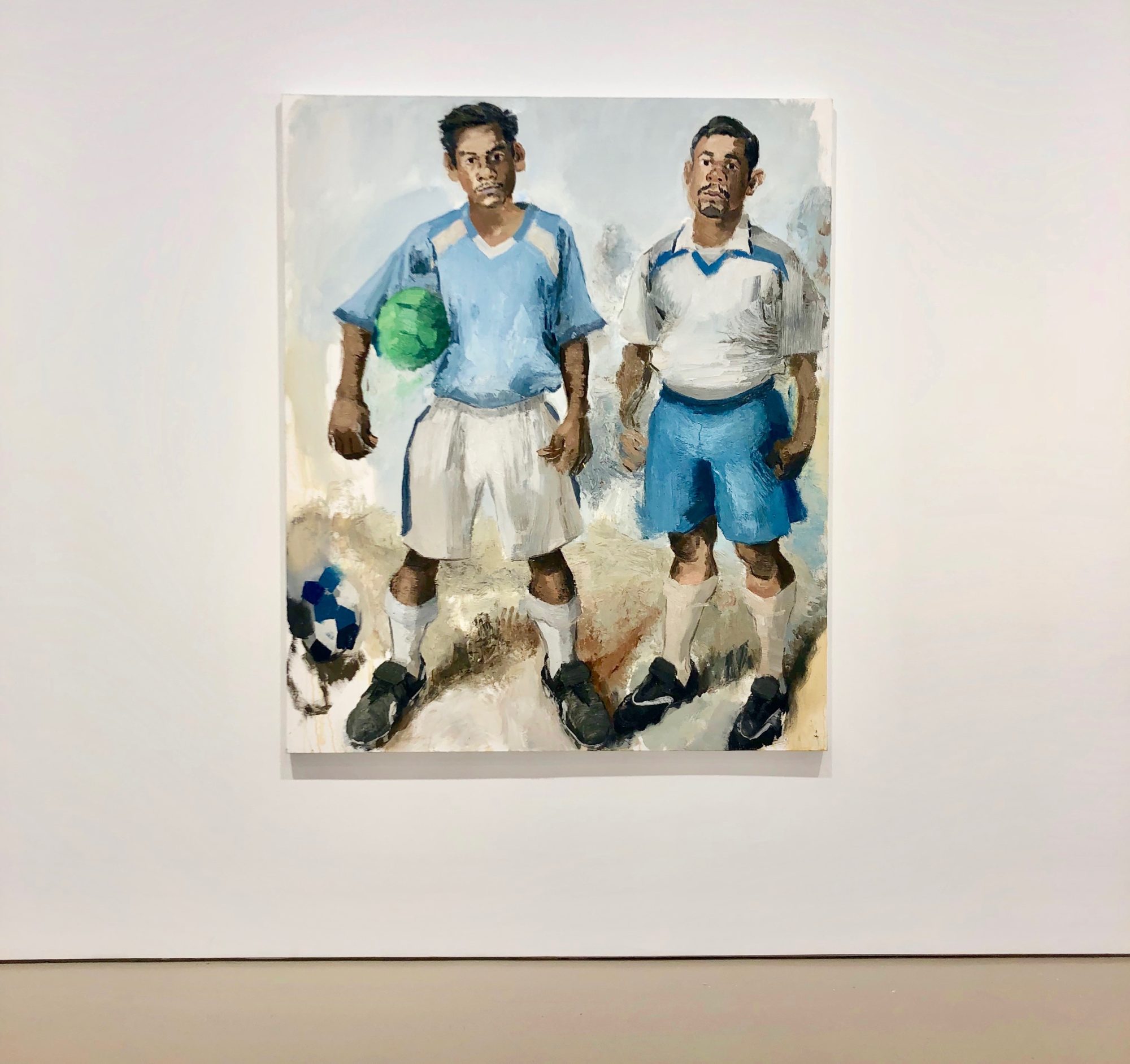 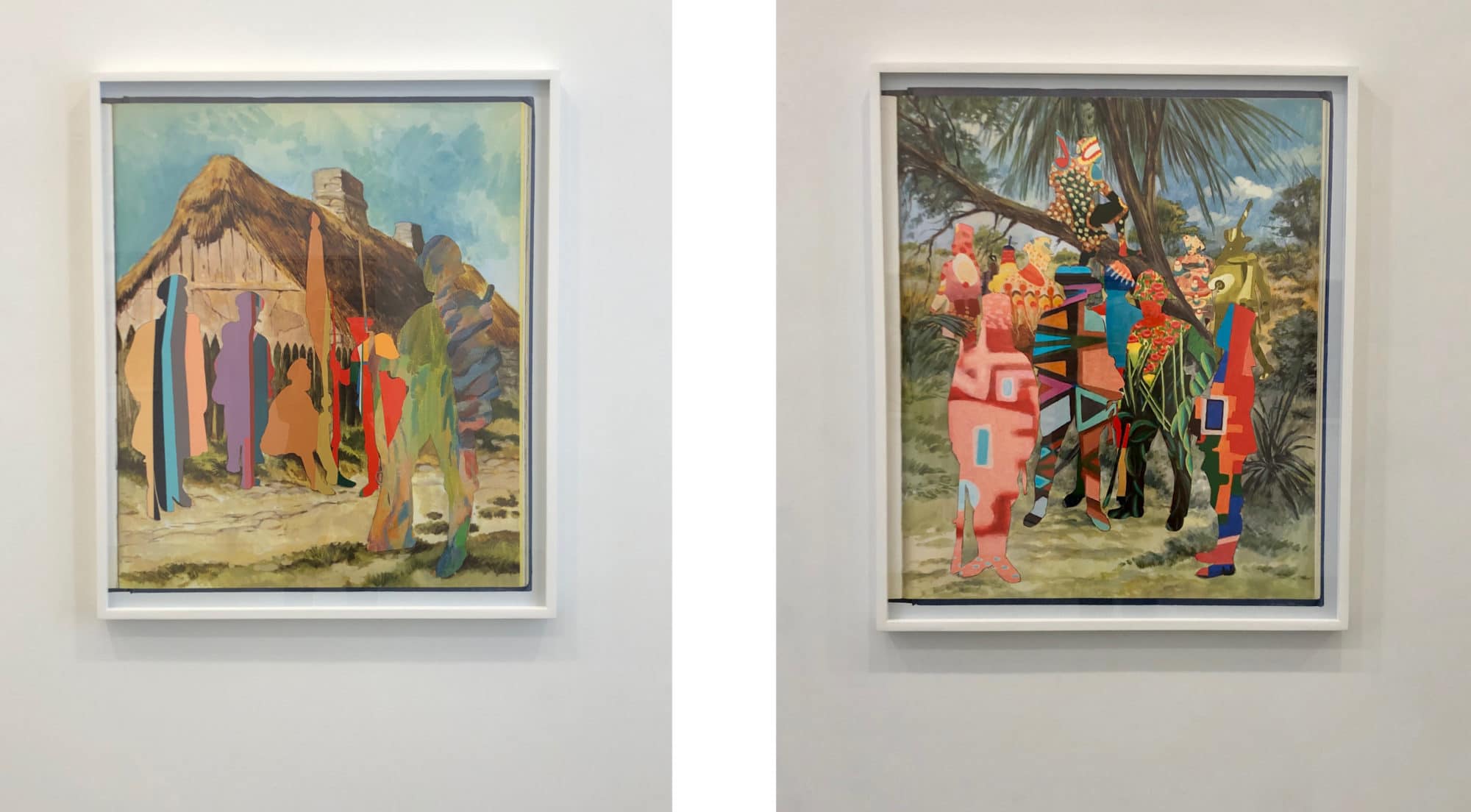 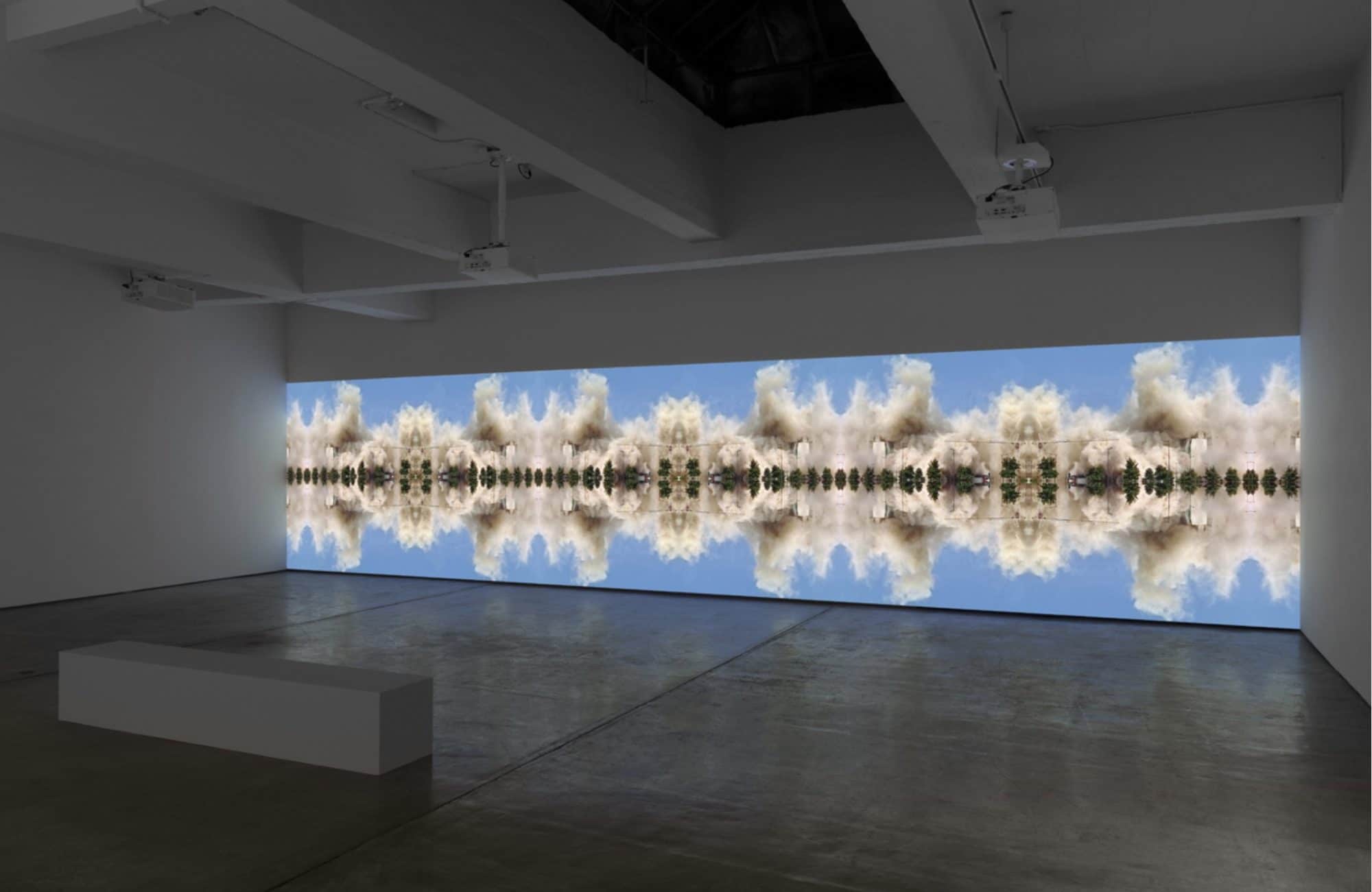 Raad creates work that explores the ways that events of physical and psychological violence affect bodies, minds, culture, and historical narrative. For this exhibition, Raad explores Beirut, the capital of Lebanon’s constant physical transformation during the protracted wars. In the early 1990s, Beirut’s ravaged downtown embarked on vast reconstruction, launching the largest urban redevelopment project of the city’s history. Examining the persistent effects of the war, as well as the use of photography and video as an index for archiving a violent past that lingers, Raad’s works cast a quizzical, mediated eye onto images of the city from this time. 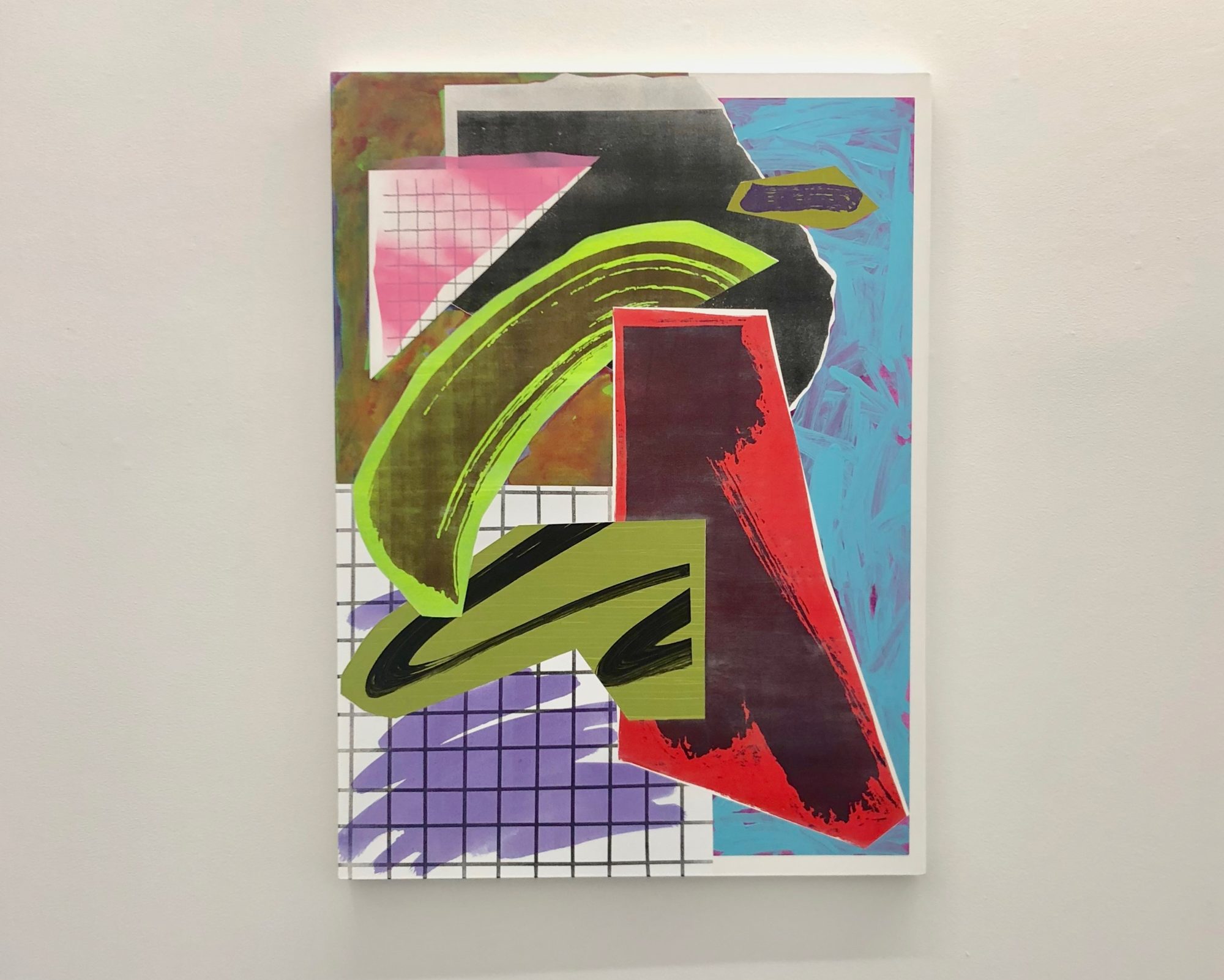 Walsh’s paintings are the result of an interest in collage, both in a literal sense and as a conceptual framework for understanding the legacy of abstraction. His process begins with small-scale collages constructed from photocopies of various shapes and marks – some expressive, others graphic or digital – which respond to the history of abstract painting. Walsh’s vibrant palette and cut-and-paste aesthetic lends itself to 80’s and 90’s pop-culture references. Walsh utilizes technology to obfuscate a painting’s archaic form. 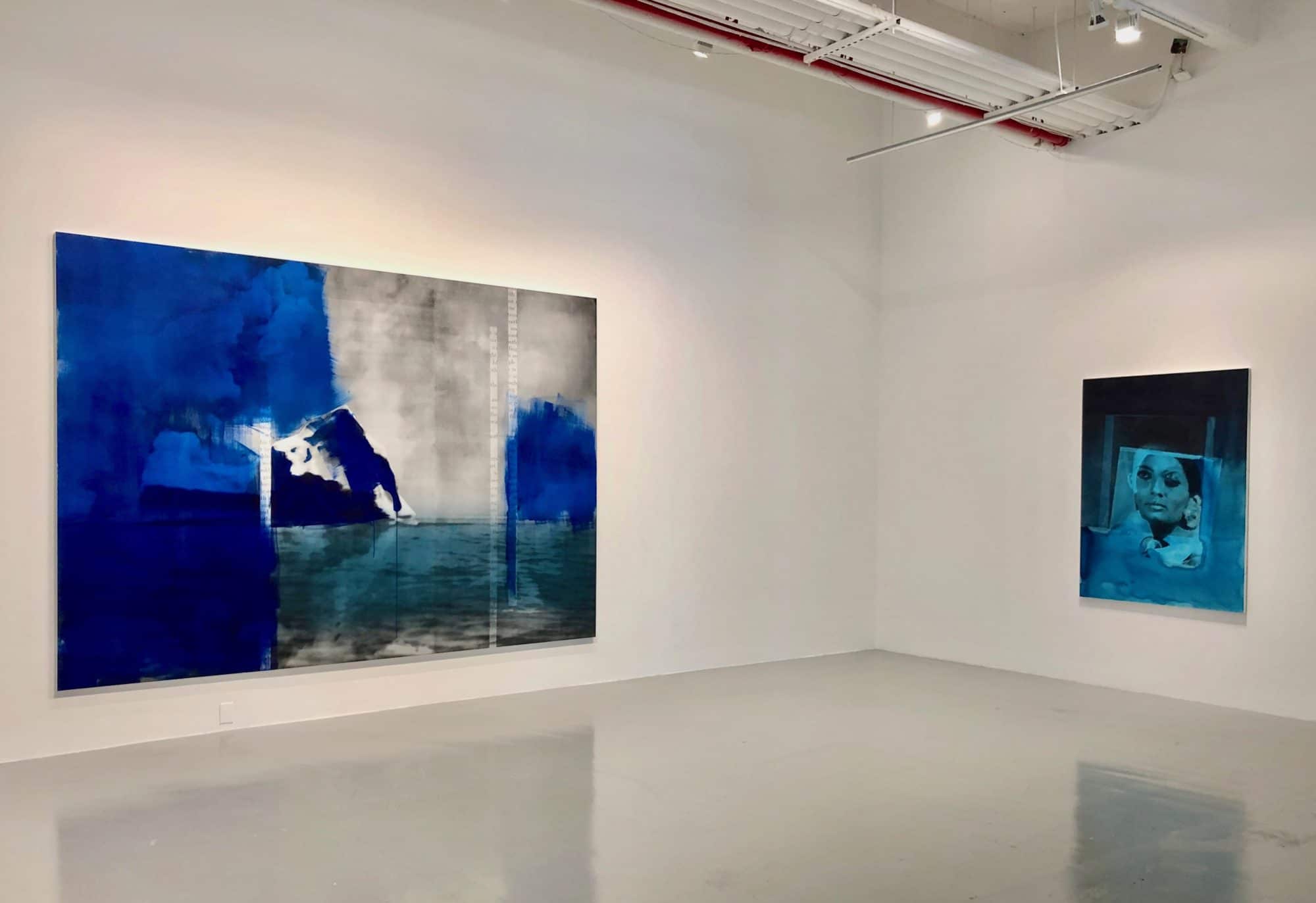 The center of Simpon’s practice is built upon themes and motifs of explorations focused on the nature of representation, identity, gender, race, and history. Simpson’s powerful works have entangled viewers in an equivocal web of meaning, drawing upon techniques of collage through the use of found materials, often culled from the pages of vintage Jet and Ebony magazines. Equally arresting and poetic, the paintings engage viewers with layers of paradox, capturing the mystifying allure of an arctic landscape in inky washes of blacks, grays, and startling blues.

Heichemer’s richly-colored paintings exude an intense sense of motion, as delicate lines meld with thick brushstrokes and coalesce into wide washes of color. The layering of color in her work, in particular the deep greens and blues, add a tactility that suggests ongoing action and formation just beneath the surface plane in which this one moment has been caught. While her works don’t directly reference any particular landscape or view, the bright yellows and greens, deep blues, and specks of pinks and reds in her paintings suggest an exuberant experience of nature. 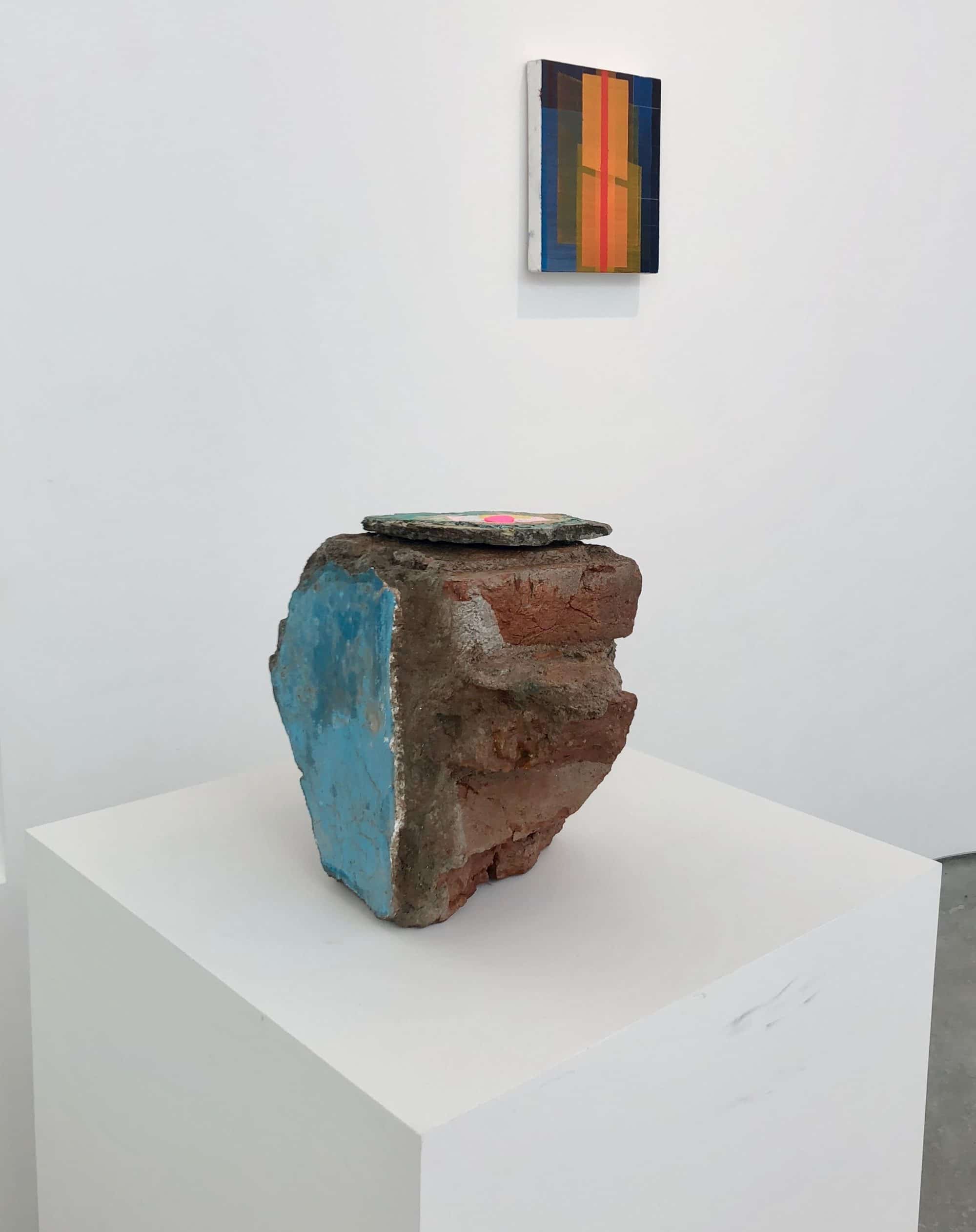 Tanya Goel, “This, the Sublime, and its Double” pop-up exhibition at Nature Morte.

Goel makes her own pigments from a diverse array of materials including charcoal, aluminum, concrete, glass, soil, mica, graphite and foils, many sourced from sites of architectural demolitions in and around New Delhi. She is interested in the textures of her pigments as well as their colors, which is a direct result of how they reflect light. For this exhibition she created sculptural works that also incorporate added materials onto found elements of architecture. 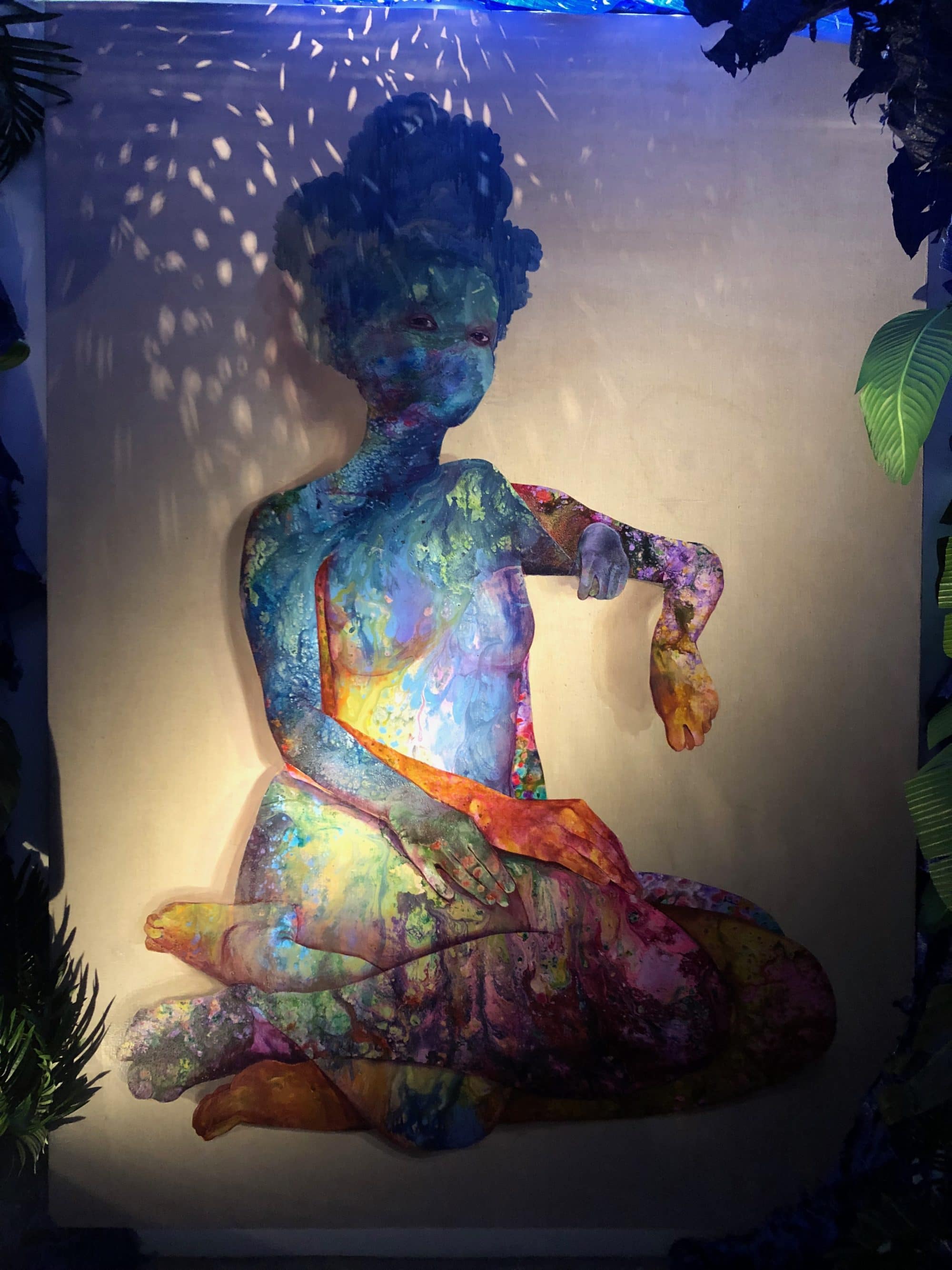 Firelei Baez, “A Drexcyen Chronocommons (To win the war you fought it sideways)” exhibition at James Cohan.

For her immersive installation at James Cohan, Báez created a room cocooned in hand-perforated blue tarp—often used for temporary shelter, and thus a symbol of both disaster and refuge—casting light onto material patterned with black diasporic symbols of nurturing and resistance. Facing each other within the tented installation are two imaginative portraits of empowered, black female protagonists. Báez has created a generative space in which the transmission of dominant historical narratives and ideologies can be reexamined, subaltern histories excavated, and new speculative possibilities explored. 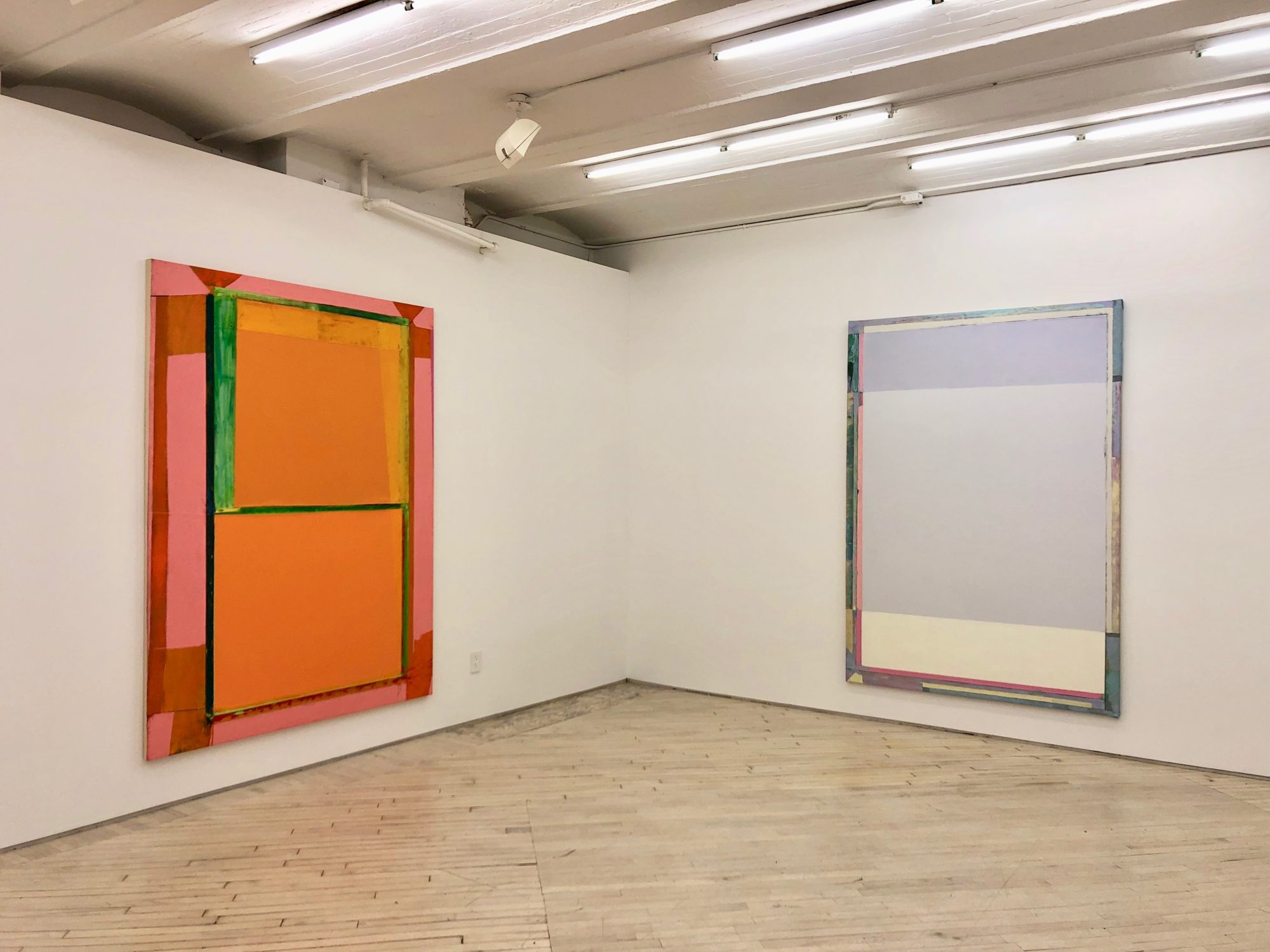 These works are heavily-laden with exuberant colors and bearing traces of the many multiple stretchings and foldings that have become Rommel’s signature style. The history of each work’s complex construction is inscribed into its surface: the deep grooves and creases describe the many stages and revisions enacted by Rommel. 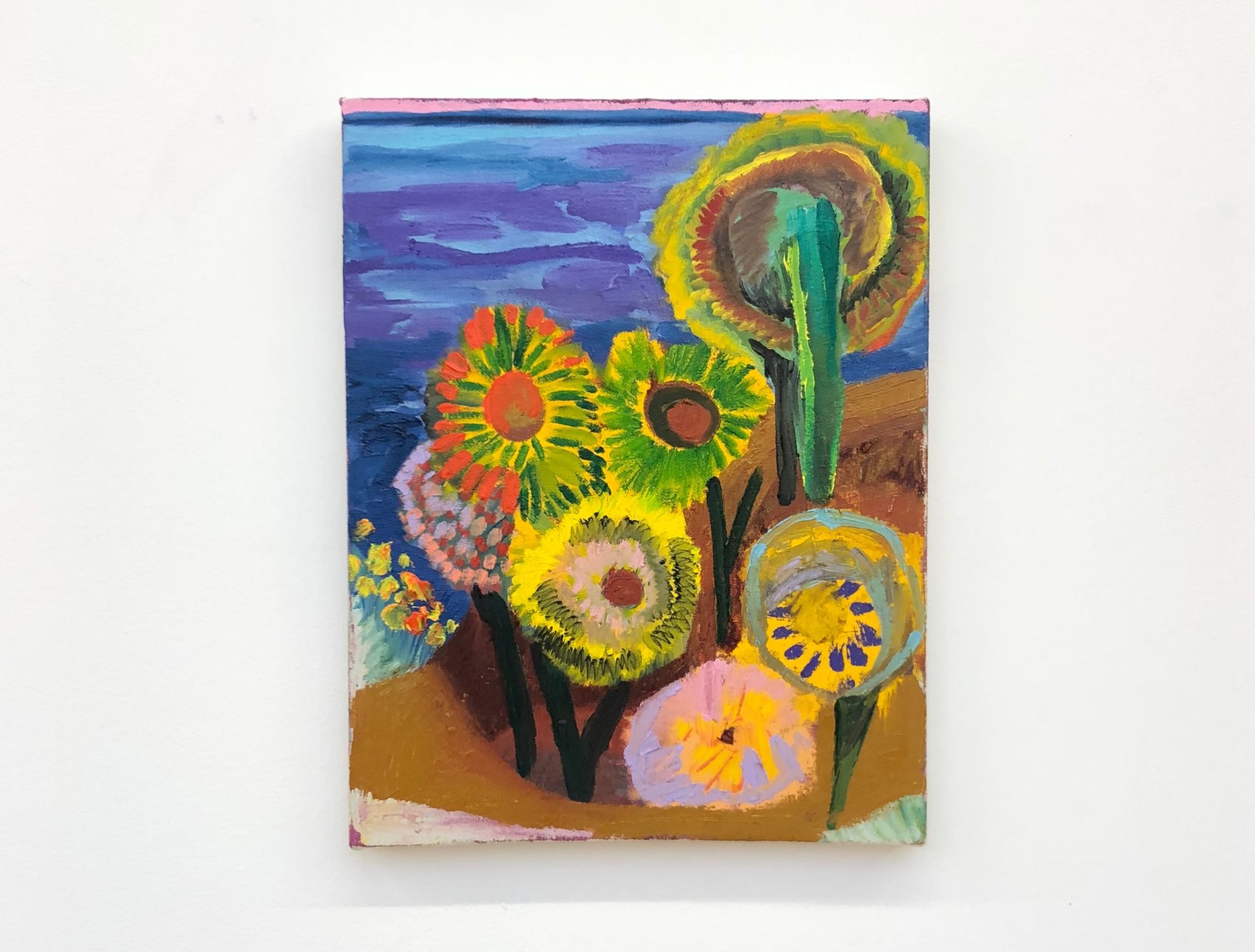 Shara Hughes, “In Lieu of Flowers,” 2019, oil and acrylic on canvas at Rachel Uffner.

Hughes works are vibrant and visionary, informed by her deep-seated knowledge of art history. A wide range of brushstrokes and materials, including acrylic paint, oil paint, and dye, are utilized to create a sense of aggression and urgency. Playfulness is key to the Hughes’ process, allowing the subject matter to become a metaphorical playground. The flowers echo sultry figures, becoming humanlike in their display. 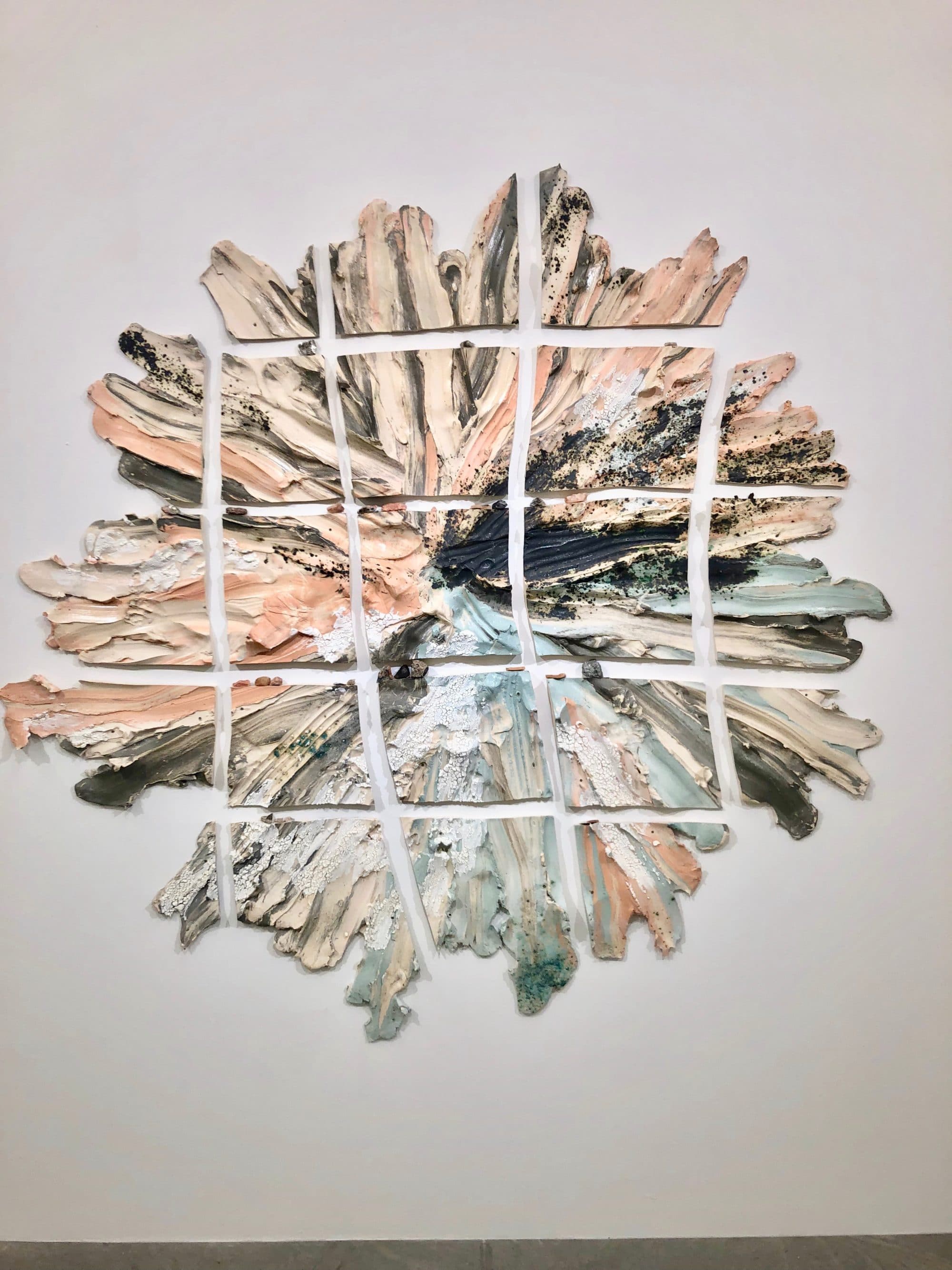 Ruais’ process is guided by choreographed actions, full-body gestures, and specified environments. The pieces begin with a mass of clay equal to her bodyweight and are then formed by exhaustive bursts of spreading, pushing, kicking, and scraping. Made in various environments, the work charts the relationship between the sensorial body, materiality, and the landscape. The works in this exhibition were made in Ruais’ garden. Not only do these pieces bear the marks of the artist’s making, they are impressed with the botanicals growing nearby and the organic matter found on the ground. 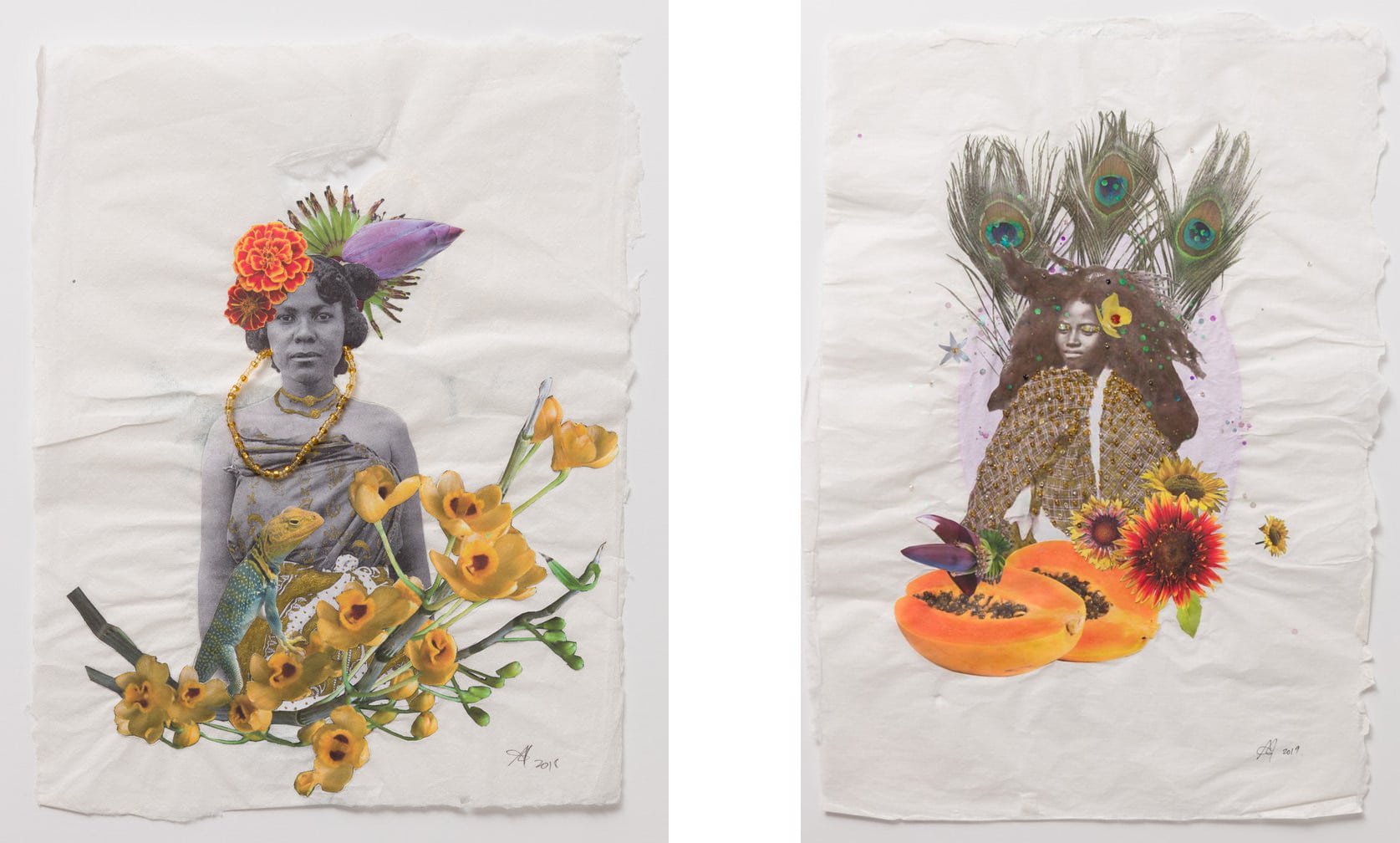 Andrea Chung collages on handmade paper with beads, glitter and watercolor elements at the Klowden Mann pop-up in Lower East Side.

Klowden Mann gallery from Los Angeles opened a pop-up exhibition in the Lower East Side entitled HOME: narratives of time and belonging. Andrea Chung’s collaged and beaded works on handmade paper reference her ancestral lineage in Jamaica and Trinidad and her grandmother’s role as a traditional midwife with the pulp of the paper surface made from birthing cloths.